Time Out for a Baggage Check at Booth #2 | His Truth, My Voice

The Welcome Center of the Word

We are still here at the Welcome Center of the Word, where we have been arming ourselves with information which will prove to be invaluable during the remainder our rocking and rolling trip through the Bible.  Having first learned a little something about the Bible at Booth #1, it is now time for us to move on to Booth #2, where we will be given the opportunity to identify and check some of the baggage that we have brought with us on this trip.  And make no mistake about it, regardless of the group you are traveling with, when you boarded this Truth Train, you did so with one or more bags in tow.

For a DOT to confirm this, we need look no further than my handy dandy pocket dictionary, which defines baggage as 1) the bags or luggage of a traveler; or, 2) the burdensome beliefs or practices of an individual.  Clearly, both of these definitions apply to us, for each one of us is a traveler, not only on this tour through the Bible but also on the journey through life; and, in the course of our journeys, we have all acquired some beliefs and practices which, when lined up against the truth revealed in Scripture, will prove to be quite burdensome indeed.

So, just what constitutes these burdensome beliefs and practices?  For our purposes, they can be, but certainly aren’t limited to, any or all of the following: 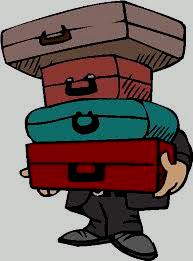 Burdened with Baggage from the Past

Even from this limited listing, it should be easy enough for us to see that the baggage of which we are speaking is anything in our lives that misrepresents God, anything that deceives us about who we really are, and anything that deludes us into thinking we can live life successfully apart from God.  These misrepresentations, deceptions, and delusions are really nothing more than the flawed patterns of thought that have developed in our minds over time, and which serve primarily as a means of keeping us alienated from, and at odds with, with God.

As for when, where, and how we picked up all of this flawed thinking, its point of origin in our lives can be traced all the way back to the moment of our births, when we each arrived in this world carrying one of the most burdensome bags anyone could ever carry—a trunk filled to the brim with our fallen human nature.  This enormous case came pre-packed for us with an “IT’S ALL ABOUT ME!” mentality, a feature insuring that all of our future thoughts and actions would be at cross purposes with those of God.  And, as if this wasn’t enough baggage for any one person to haul around, as we made our way through life, we gradually added a number of other bags to it; with the most burdensome ones coming first from our family, friends, and early experiences in life, and the later ones being picked up from our religious and educational training, and through our encounters with the cultural forces at work all around us.

While many of us wouldn’t consider this baggage to be a problem worth mentioning—that is, we could just be so used to carrying it around that we have come to regard it as a natural part of our lives—God views it in an entirely different way.  In fact, in the Bible, these bags of deceptive and delusional thought patterns are referred to as “strongholds,” or faulty patterns of thinking which have developed such a “strong hold” on us that they keep us bound by bad habits, irrational behaviors, or by pride or an exaggerated sense of self.  As such, they have become fortresses erected around our erroneous beliefs—fortifications which, in our minds, serve to protect and justify our choices in life, and to help insulate us from any potentially painful experiences.  But, it needs to be noted here that bondage of this or of any other kind is an anathema to God; for, as He tells us in Galatians 5:1, it is “for freedom that Christ has set us free…”, in John 8:36, “…if the Son sets you free, you will be free indeed…”, and in 2 Corinthians 3:17, “ Now the Lord is the Spirit, and where the Spirit of the Lord is, there is freedom.”

After identifying and tagging as strongholds the baggage that we brought with us, our next step is to check those bags here at Booth #2—that is, if we really want to enjoy the freedom of bondage-free living and travel—so here is how we are to go about doing that.

The first step calls for us to recognize that all of our strongholds are spiritual in nature; in fact, they are the heavily guarded outposts of lies and deceptions which have been built up in our minds by the devil, the one whom Jesus described in John 8:44 as the “Father of Lies.”  Because the devil is a powerful spirit whose chief aim is to keep us from God and His revelation of the Truth, the way that he and his lies will be defeated is through the power of a stronger Spirit which, in this case, is the Holy Spirit of Truth Himself.  For, as we are told in 2 Corinthians 10:3-5:

“… though we walk in the flesh, we are not waging war according to the flesh.  For the weapons of our warfare are not of the flesh but have divine power to destroy strongholds.  We destroy arguments and every lofty opinion raised against the knowledge of God, and take every thought captive to obey Christ.”

These weapons are described for us in Ephesians 6: 11-18 in the following way:

“Put on the whole armor of God, that you may be able to stand against the schemes of the devil.  For we do not wrestle against flesh and blood, but against the rulers, against the authorities, against the cosmic powers over this present darkness, against the spiritual forces of evil in the heavenly places.  Therefore take up the whole armor of God, that you may be able to withstand in the evil day, and having done all, to stand firm.  Stand therefore, having fastened on the belt of truth, and having put on the breastplate of righteousness, and, as shoes for your feet, having put on the readiness given by the gospel of peace.  In all circumstances take up the shield of faith, with which you can extinguish all the flaming darts of the evil one; and take the helmet of salvation, and the sword of the Spirit, which is the word of God, praying at all times in the Spirit, with all prayer and supplication.” 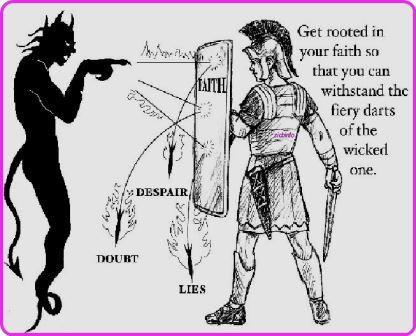 Suited Up for Spiritual Warfare

Once we’ve been armed with these weapons, we can begin to exercise the authority delegated to us by Christ in Matthew 28:18; and with it, we can, through the power of the Holy Spirit, proceed to bind up the “strong man”—the demonic being in charge of protecting that mental fortification.  For, according to Jesus’ instruction in Mark 4:27:  “…no one can enter a strong man’s house and plunder his goods, unless he first binds the strong man.  Then indeed he may plunder his house.”  With our successful overthrow of this strong man, we can then move in and take captive any of the lying thoughts previously under his protection; leaving in their places Truth from the Word of God.  As we do, construction can begin on a Strong Tower of Truth, built in the very place where the stronghold of lies once stood.  And we, as warriors for Christ, will have reclaimed territory too long in the possession of His enemies.

Of course, in an ideal situation, all of us would be ready, willing, and eager to check all of our bags here at this station—but this isn’t an ideal situation, is it?  Since it has taken most of us years and years to collect the many burdensome beliefs and practices that we have brought along with us on this trip, it will quite likely take many more years before some of them can be discarded.  But who knows—as we continue on our journey through the Word, and as we come face to face with more of the Truth waiting for us up ahead, we may begin to realize that we can do very well without some of those misrepresentations, deceptions, and delusions  and happily begin throwing them from the train.