Tuesday’s Gift in celebration of His Truth, My Voice’s second birthday is a return visit to the reflection,

“Of Trees and Tapestries…” 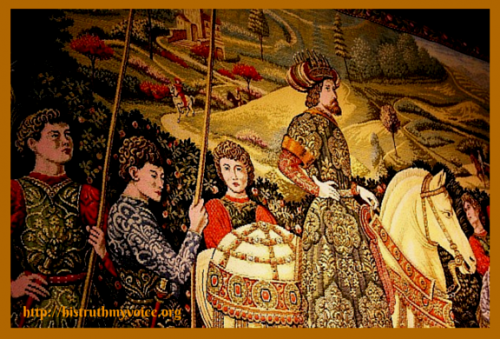 A Beautiful Example of a Tapestry

“The Spirit of the Lord God is upon me, because the Lord has anointed me to bring good news to the poor; he has sent me to bind up the brokenhearted, to proclaim liberty to the captives, and the opening of the prison to those who are bound; to proclaim the year of the Lord’s favor, and the day of vengeance of our God; to comfort all who mourn; to grant to those who mourn in Zion—to give them a beautiful headdress instead of ashes, the oil of gladness instead of mourning, the garment of praise instead of a faint spirit; that they may be called oaks of righteousness, the planting of the Lord, that he may be glorified.” (Isaiah 61:1-3)

Try to imagine with me, if you can, what human history might look like to God, as He surveys it from beginning to end.  From the prophetic insight given to us by Isaiah in the passage above, it seems quite likely that God would view it as a forest of trees, one stretching all the way from the Garden of Eden to the coming Paradise in the new Heaven and Earth; trees which, in His eyes, are representative of the countless lives of men and women throughout history who have been made righteous by the blood of His Son, Jesus Christ.  As plantings of God, they have come in every size and shade imaginable, yet they have all produced the same desired fruit of holiness by which the Lord God, the creator and sustainer of all the earth, will forever be glorified!  What a truly satisfying picture this would be for God to behold; nothing less than a magnificent tapestry depicting His marvelous and ages-long redemption; an intricately woven work of art designed to surround His throne and to testify of His unfathomable love, grace, and mercy for all eternity. 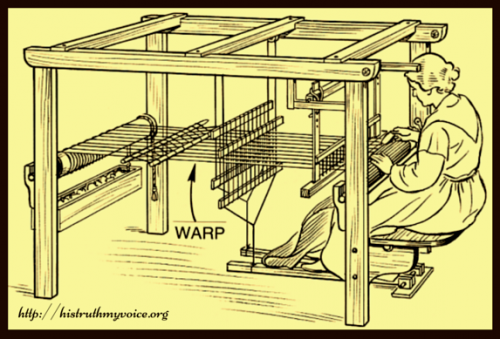 At Work on a Loom

Although some may not be all that familiar with tapestries, they have been around for quite a long time, with some known to have been in use as far back as the ancient Grecian era.  Similar in texture to carpets, but hung on walls instead of covering floors, tapestries have served as portable murals for centuries, often gracing the throne rooms of kings as ways of depicting the memorable events or victories that have taken place during their reigns.  Typically, tapestries are woven on vertical looms, or large wooden frames, that hold two sets of threads—the longer set being the stationary, immutable threads running lengthwise which are called the “warp,” with the shorter set being the variable threads running width-wise which are called the “weft.”  The threads making up the warp are held in place under tension by the two sturdy frames at the end of the looms; while the shorter and discontinuous weft (threads) are woven in and out of part or all of the warp to create the design of the tapestry.

With this imagery in mind, let’s now try to imagine how such a weaving process might be applied to the story of God’s redemption.  To begin, let’s close our eyes and try to visualize an enormous loom being set into place by God when, “In the beginning…,” He bracketed the timeline for His redemptive story through the placement of two sturdy frames, one marking the beginning and the other marking the ending of human history.  Having already discussed these at great length during many of our previous visits, we should be quite familiar with the two wooden frames by now; for they are the two trees that man was given to choose from in the Garden of Eden.  The tree that was chosen, the Tree of the Knowledge of Good and Evil, in its choice, became the beginning frame for the tapestry; while the tree that was rejected, the Tree of Life, took its place as the end frame—the frame toward which all of the design work was to be directed.

Given the enormous distance between these two frames and the incredible number of events that the design of this tapestry was meant to depict, we should not be surprised to learn that an additional piece of wood had to be inserted at the midpoint of the loom in order to secure and support the weight of the weaving work which would be taking place upon it.  This plank was a tree, too, and one that we have also already discussed; for it was the Cross on which the Son of God was crucified; the lifeless tree which, throughout time, has served as the embodiment of all of mankind’s dead works and futile attempts at self-salvation.

Now, with the framework for the loom all set up in our minds, let’s begin to visualize the commencement of the weaving process as the first set of threads are placed on the loom.  These are the warp (threads), and for the purposes of this tapestry, they are ten unbreakable cords which have been stretched tautly from, and then securely fastened to, the first side frame, over the middle plank, and on to the other side frame.  White in color and extending out across the ages, these cords are God’s eternally fixed standards of holiness–His unchanging rules for righteous living–known to us as the Ten Commandments; the plumb lines against which the actions of all men will be and have been measured.   It is only fitting that these should be the first threads that are woven into the fabric of redemption because, unlike everything else:

Given the nature of these laws, what better foundation for redemption could have been laid, other than these?

With God’s laws now securely attached to the frames of the loom, the really intricate work on the tapestry can begin to get underway.  What makes this part of the process so tricky is that before the weft (threads)—or those short and variegated “loose threads”created by humanity’s failures to measure up to the standards of God’s laws—can be woven over and under that holy warp, they must first be tied to the crimson cord that runs through the entire length of the tapestry’s design.  This cord was introduced into the human story immediately following man’s first violation of God’s command and, as the cord of redeeming faith, it went on to connect every image in the story, from the beginning frame at the Tree of the Knowledge of Good and Evil, all the way to the Cross, and then on to the end frame at the Tree of Life.

Of course, this cord was none other than our blessed Redeemer, Jesus Christ; the One who was promised, the One who came, and the One who will come again—and, the only One capable of salvaging all of the threads left dangling by the sins of mankind and then incorporating them into a beautiful and eternal work of art for all to behold.  And how was He able to do this?  By dying the death that should have been ours, on the tree representing all of our dead works, He was able to remove sin’s curse, and open the way to the Tree of Life once more, to any and all who would believe.

Try to imagine with me, if you can, God looking around His throne room, gazing lovingly upon His glorious tapestry of redemption—the one depicting the millions, perhaps even billions, of oak trees that were made righteous through their faith in the atoning work of Jesus Christ; each tree springing up from a seed sown in the earth and then growing toward heaven, and each tree reproducing that one seed many times over through an abundant spiritual harvest, some of which will include:

Try to imagine with me, if you can, the kind of joy a sight such as this would bring to the heart of God.

When, at the end of time, God scans His forest of trees, will He find you there?  Will you be a part of His tapestry of redemption—one of His oaks of righteousness, a planting of the Lord, that He may be glorified?  If not, can there possibly be a good reason why not? 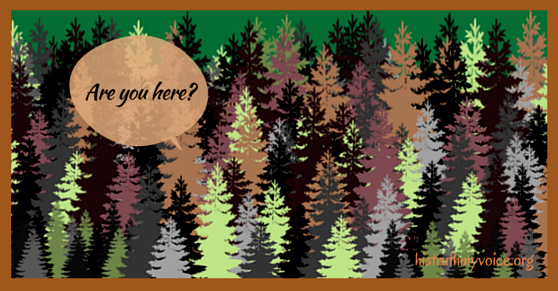 God’s Many Trees of Righteousness

The Tapestry of Redemption presented in song, by the Tally Trio in “He Saw Me/Jesus Paid it All.”