The curtains here at Stage #1, where God’s One Big Story is currently in production, are now opening on Vignette #6 of Act 1, Scene 1 of the Story.  As they do, they reveal a set which, in the absence of any light, appears to be completely empty.  However, when we begin hearing angry shouts, screams, and cursing, as well as the unmistakable sounds of fighting—as unseen fists are meeting with unknown faces in what surely sounds like unrestrained fury—we immediately become aware of the presence of a great many people on the stage, even though they continue to remain invisible to us. 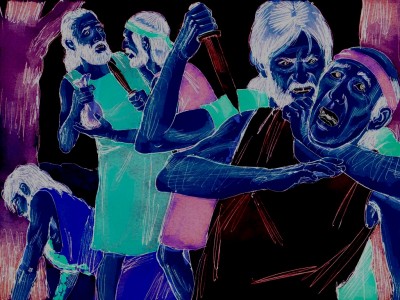 Given the volume of this din, and with what we have so recently learned about the Planet, Population, and Powers at work during this period of human history, we are not at all surprised to hear our off-stage Narrator announce…

What does surprise us, though, is the sudden appearance of a near-blinding shaft of light, streaming from an overhead spot and directed toward the center of the stage—the place where we now see a man standing alone in the light.  As soon as he comes into view, the commotion in the background diminishes enough for us to hear the Narrator once again, as he says…

[But] Noah was a righteous man, blameless in his generation.  Noah walked with God.  And Noah had three sons, Shem, Ham, and Japheth (Gen. 6:8-10).

As Noah continues standing alone in the light, the stage, as well as the entire theatre, suddenly begins to shake as the inimitable voice of God is heard, revealing to Noah the following startling news and very specific instructions… 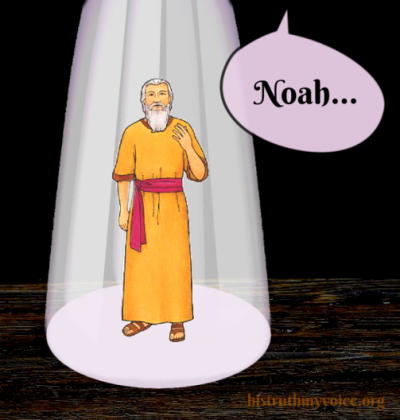 I have determined to make an end of all flesh, for the earth is filled with violence through them.  Behold, I will destroy them with the earth.

For behold, I will bring a flood of waters upon the earth to destroy all flesh in which is the breath of life under heaven.  Everything that is on the earth shall die (Gen. 6:13-17).

At this point, there is a brief pause; just long enough for us to wonder what must be going through Noah’s mind upon hearing such an ominous pronouncement.  Surely, he must be questioning what an ark is, what a flood is, and what this will mean to him and his family.  Then, as if to allay any such thoughts—or possible fears—we hear the voice of God say to Noah…

But, I will establish my covenant with you, and you shall come into the ark, you and your sons, your wife, and your sons’ wives with you (Gen. 6:18).

Having finished with His instructions, God stops speaking, and Noah walks off the stage.  As he departs, the spotlight dims and we hear the voice of our Narrator close out this Vignette with…

With this, the curtains close once again, giving the crew time to reset the stage for the next Vignette—and giving us time to consider just what Noah’s obedience to God’s commands would have cost him.

The High Price of Obedience

Although no one knows for sure how long it took Noah to build the Ark, given its enormous size—and the fact that he didn’t have the luxury of (or the electricity for) power tools—it must have taken him many years.  Some understand God’s declaration in Genesis 6:3, “…My spirit shall not always strive with man, for that he also is flesh: yet his days shall be an hundred and twenty years,” to mean that it would take Noah that long to complete this assignment.  Given the massiveness of the undertaking, the limited number of tools and hands available, the extended life spans of those in Noah’s generation, and the incredible long-suffering of God, this was entirely possible.

If this was so, Noah would have been about 480 years old when he was given this job; which, when considering that he lived for 950 years, would have put him at the midpoint in his life. Since Scripture doesn’t tell us anything about Noah’s occupation prior to this time, we have no way of knowing if he had any carpentry skills or construction experience which would have qualified him for this type of work.  And yet, here at midlife, he was being directed by God to leave whatever vocation he may have had before and take up a new one; one for which he may not have had any preparation, and one from which, for the next 120 years, he would derive no income.  Not only would this job not pay him anything, before it was finished, it would end up costing him a ton of money (in whatever the currency of the day happened to be) for the materials (I can’t help but wonder what Mrs. Noah had to say about this plan when she first heard of it?).

To get a small idea of what these expenses could have amounted to, let’s get out our calculators and do a little math:

As for the 120 years that he invested in this project, any one of the following reasons would have made these years some of the most physically demanding and emotionally and spiritual draining ones of Noah’s life. 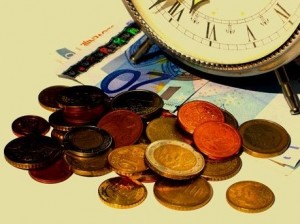 Obedience to God is Costly

So, to recap what we have just discussed, Noah’s obedience to God’s commands cost him…

Given the expensive price tag that was attached to it, why did Noah choose to go the way of obedience?  What could possibly have motivated him to give his all to the completion of this work?  For that answer, we need look no farther than Hebrews 11:7a, where we learn that…

By faith Noah, being warned by God concerning events as yet unseen, in reverent fear constructed an ark for the saving of his household.

And, I think if we could ask Noah if it was all worth it, he would say that it was, for…

By this he condemned the world and became an heir of the righteousness that comes by faith (Hebrews 11:7b)…

…and the payoff doesn’t get any better than that!

Here is Don Moen with “Trust and Obey”–something that Noah certainly knew how to do..