The Washing of the World | His Truth, My Voice

Uh-oh…the lowering of the theatre’s lights combined with the rising strains of music from the orchestra pit are telling us that our brief analytical interlude on the high price of Noah’s obedience is over, and it is time for our next Vignette to begin—this one, the 7th Vignette in Scene 1 of Act 1 of God’s One Big Story.  During our last Vignette, we witnessed God warning His servant, Noah, of a coming flood on the earth, and instructing him to build an Ark, not only for the salvation of his household but also for the preservation of the animal life which would be needed to replenish the earth after the flood.

As the curtains separate yet again, they reveal a huge vessel—one about the size of a modern ocean liner but shaped more like a rectangular box with a lid on it—occupying much of the now well-lit stage.  We also see Noah, standing at center stage once more, looking a lot older and a great deal wearier than he did the last time we last saw him.  If, as conjectured during our last Vignette, it took him 120 years of hard physical labor to complete the Ark, this would certainly help account for the radical change in his physical appearance. 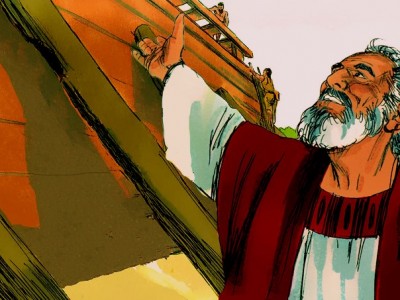 Noah and the Ark

Although we aren’t told if God spoke to Noah at any time during the Ark’s construction, we do hear His Voice now, reverberating throughout the theatre—an experience which once again produces goosebumps in all of those who are in attendance—as He instructs Noah to…

Go into the ark, you and all your household, for I have seen that you are righteous before me in this generation.  Take with you seven pairs of all clean animals, the male and his mate, and a pair of the animals that are not clean, the male and his mate, and seven pairs of the birds of the heavens also, male and female, to keep their offspring alive on the face of all the earth.

For in seven days, I will send rain on the earth forty days and forty nights, and every living thing that I have made I will blot out from the face of the ground (Gen. 7:1-4).

And, as we hear our off-stage Narrator comment once more that… 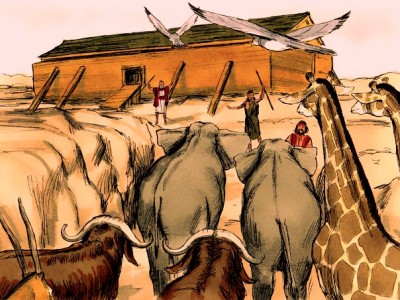 …we watch in awe as animals of every description, all in pairs of male and female, enter from various points around the stage and slowly yet orderly make their way toward Noah and the Ark.  Upon their arrival, Noah’s sons descend from the doorway of the Ark and begin the very tedious and time consuming task of escorting each pair of animals to their individual rooms or nests, and then getting them settled in.

As the animals keep coming and as this process continues, crowds of spectators begin appearing on the periphery of the stage—some standing in groups and talking among themselves, trying to figure out what all this could possibly mean; while others brazenly step forward and begin mocking and jeering at Noah and his family, and at the bizarre scene being played out before them.  This activity keeps up as the lights on stage are dimmed and then relit six times to simulate the passage of six days and nights.

Then, with the arrival of the seventh day, and after the last pair of animals is safely ensconced in the Ark, we hear the Narrator remark that…

They went into the ark with Noah, two and two of all flesh in which there was the breath of life.  And those that entered, male and female of all flesh, went in as God had commanded him (Gen. 7:13-15).

Once they are all on board, and with the scoffers outside still crying out derisively—such things as Hey, Noah…

Where is the promise of [its] coming?  For ever since the fathers fell asleep, all things are continuing as they were from the beginning of creation (1 Peter 3:4)…

…suddenly, the door to the Ark closes—seemingly on its own—and is sealed up tight by some invisible hand or power.  Those standing around it, not knowing what to make of this, are startled into silence.  Their silence is short-lived, however, because it isn’t long before the ground under them begins to shake; then it starts to rupture, creating gaping holes in the surface of the earth through which massive amounts of steam, dirt, molten lava, and water—tons of water—are spewed into the air.

At this, the people begin screaming and running—some over to the Ark, banging feverishly on its hull and begging to be let in; while others scatter in every other direction, searching for safe places in which to hide.  But there aren’t any places on the ground, because the waters which have been gushing up from underground reservoirs are now spreading out over the whole area.  With these waters rising rapidly and swirling ever more furiously around the people’s feet, many hastily seek out refuge in the nearest trees; while others make their breaks for the highest elevations of the land, climbing up and clinging onto any rocks or hills that they can find. 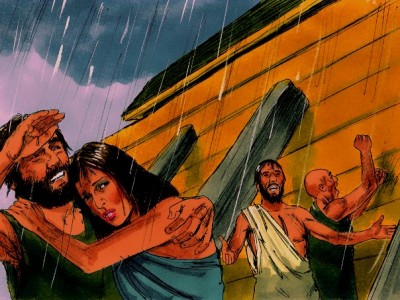 The Day of Grace Has Passed

Unfortunately, with their focus fixed on the devastation taking place under their feet, those fleeing have not looked up to see the changes which have been taking place in the sky overhead.  For, in response to the incredible amount of ash, heat, and moisture that has been discharged into the atmosphere, the sky is now almost completely dark, and filling up fast with black and foreboding clouds.  These soon begin to collide with one another and, as they do, the atmosphere explodes as thunder and tremendous bolts of lightning are released into the air.  With every peal of thunder warning of their imminent appearances, one electrifying shock of lightning after another is fired off; each seeming, in its sword-like sharpness, to pierce the fabric of the sky; creating the slits through which water, in the form of huge raindrops, begins being poured out from the heavens.

Over the sounds of the waters gushing up from below and those streaming down from above, we somehow manage to hear the voice of our Narrator as he declares…

In the six hundredth year of Noah’s life, in the second month, on the seventeenth day of the month, on that day all the fountains of the great deep burst forth, and the window of the heavens were opened.  And rain fell upon the earth forty days and forty nights (Gen. 7:11-12). 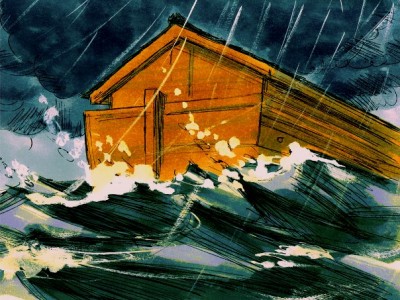 The Ark on the Waves

As we watch the Ark rising along with the water, the scene on the stage suddenly becomes eerily quiet, for the voices of all those who remained on the outside of the Ark have finally been silenced by the deluge.  We sit reverently for the next few minutes, reflecting on the magnitude of the drama which we have just witnessed—the enormity of which is soon reinforced by these solemn and summarizing words from our Narrator…

And all flesh died that moved on the earth, birds, livestock, beasts, all swarming creatures that swarm on the earth, and all mankind.  Everything on the dry land in whose nostrils was the breath of life died.

He blotted out every living thing that was on the face of the ground, man and animals and creeping things and birds of the heavens.  They were blotted out from the earth.

And, it is with this, that the stage goes dark, the curtains close, and Vignette #7 comes to a very sad and sobering end.

Travis Cottrell reminds us that even in the midst of the storm, we can remain “Still” and secure in Christ…