Salvation: What It Is and Why We Need It | His Truth, My Voice

When it comes to thinking about Salvation, there seem to be two vastly different approaches to the subject.  Although both of these are very broad generalizations…

Of course, the first approach is completely inaccurate and the second one is woefully incomplete.  So, in an effort to correct the former and complete the latter, let’s begin to stretch our Spiritual understanding as we learn What Salvation Is, and Why We Need It. 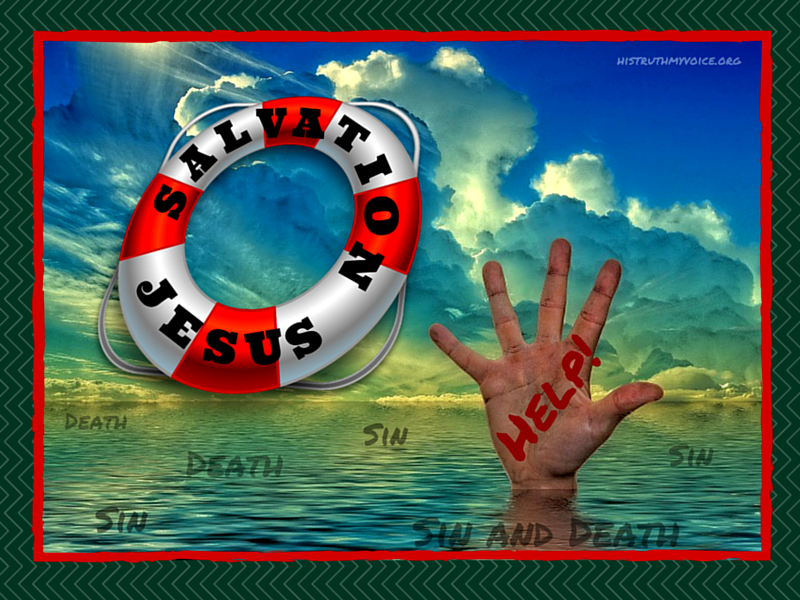 We All Need to be Rescued by Jesus

For a definition of Salvation, I prefer the one found in my little Webster’s pocket dictionary which defines Salvation simply as “a saving or a being saved” or as “a person or thing that saves.”  I like this definition because “a saving” implies an act, “a being saved” implies a process; and “a person or thing that saves” implies that salvation is not something that we can do for ourselves—it must come from a source outside of us.  Essentially, this is what Biblical Salvation is all about; for, in reality it is…

The One-Time Act of Faith

As simple as this may seem on the surface, please don’t let its simplicity blind you to the real significance of this One-Time Act of Salvation; for it is the only legitimate, divinely-authorized way in which a Holy God takes a Sinner, or a person who was…

…dead in the trespasses and sins in which [he] once walked, following the course of this world…carrying out the desires of the body and the mind, and [was] by nature [a child] of wrath, like the rest of mankind (Eph. 2:1-3)…

…and not only adopts him or her into His family as His own child, but also makes that child a Joint-Heir with His only begotten Son, Jesus!  And, it is through this One-Time Act that a person goes from being alienated from God to being accepted by Him, from religious slavery to spiritual freedom, from unrighteousness to holiness, and from certain death to life everlasting!  So, just how does all of this happen?  Well, through the three stages of Salvation known as Redemption, Sanctification, and Glorification.

Redemption and Why We Need It

Since the definition of Redemption is…to pay off, as a debt; to buy back or recover; to ransom or to obtain the release of a captive by paying the demanded price; to restore to favor…

Redemption for our purposes is the act by which our sin debt is paid, making us righteous in the sight of God and releasing us from the penalty and power of sin.

This act is a necessity for us because while God is holy, due to the sin nature we all inherited from Adam, we are not.  Therefore, before any of us can be reconciled to God and any adoption can take place, something has to be done about the problem of sin in our lives. “For out of the abundance of the heart the mouth speaks.” Matthew 12:34

While most of us are all too quick to deny that any sin problem exists, it is a spiritual reality that from the moment of our births until the moment of our deaths, we are constantly adding to a “rap sheet” of offenses against God; that is—through our thoughts, words, or deeds, we are repeatedly violating the laws of God’s righteousness, with these violations all too judiciously being transcribed into our “permanent records.”  This means that we are all lawbreakers from birth, on the run from God, and unaware of the day looming before us when we will be apprehended and called to appear in His court for judgment. 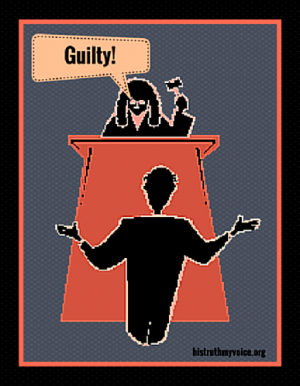 Sadly, because we don’t realize or accept the fact that we are sinners, or because we think we will be able to appeal to God on the basis of our morality or relatively good works, we mistakenly think that we can safely put this day of reckoning off until after our deaths. But, this is a disastrous decision which will leave us standing before the Righteous Judge of the Universe, alone, guilty, and without any legal representation.  And, once the charges against us have been read—and our appeals of innocence have been proven to be without merit—this Just Judge will have no other choice but to honor the law and sentence us to the death that the law demands—a death which will mean our eternal separation from God and all things holy.

But, there is a way that such a terrible outcome can be avoided. You see, this Righteous Judge is also the God of love, grace, and mercy—the One who was…

… not willing that any should perish but that all should come to repentance (2 Pet. 3:9)…

…and because of that, He made a way to provide us with an Advocate, sort of a court appointed attorney, who will plead the cases of all those who come before Him and acknowledge the crimes for which they are guilty—if they will only do so before they die! Jesus is Our Advocate

This Advocate is Jesus, the Son of God, and He can represent a sinner before God because He is the One who came to earth, lived a sinless life which met the righteous demands of God’s law, and then died an agonizing death on the Cross to pay off the sin debt owed by every human being who has ever lived.  Through the substitution of His death for theirs, deaths which the law calls for, He is able to clear the charges against them and offer them a pardon, without so much as a fine to pay!  Once pardoned, and with their sin records expunged by the blood of Christ, they can stand righteous before God and in a position to be legally adopted as His spiritual children!

Since the definition for Sanctification is …to set apart as holy; to consecrate, or to devote to sacred use…

…Sanctification, for us, is the process whereby a new child of God is set apart for the sacred or holy service of God.

In reality, this is the life-long schooling in righteousness that every child of God must undergo if he or she is to realize the eternal purpose for which they were created.  It begins at the moment of adoption when the Holy Spirit of God comes to live within the heart of each new believer, and He begins teaching him what it means to be a child of God.  He does this by…

This training—which we will discuss in greater detail in a later session—is designed to totally transform every child of God, until he thinks, speaks, and acts like Jesus; something which, when completed, will prepare him ultimately for his graduation into the glorious and eternal presence of God, his Father. 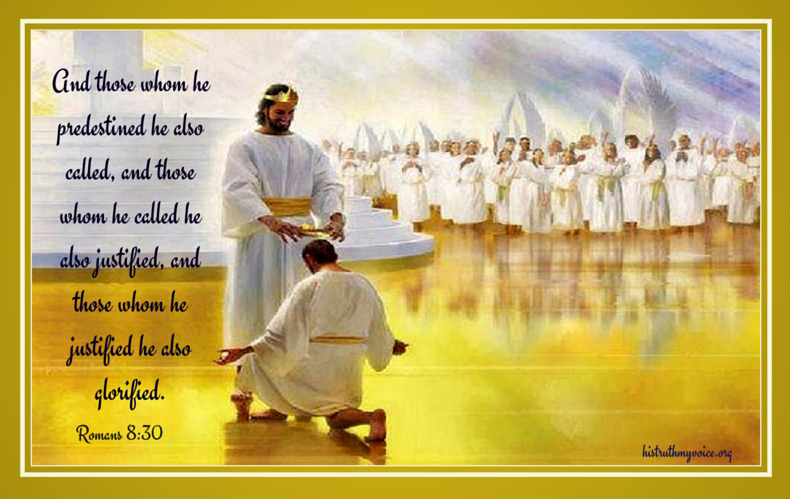 Glorification: The Final Stage of our Salvation

Since the definition for Glorification is …to give glory to, to honor; to extol; to praise highly…

Glorification is what we will experience when, upon our physical deaths, our earthly bodies are replaced by heavenly or glorified ones, and we are ushered into the presence of God where we will receive the inheritance He has promised to His children.

Then, as the legitimate, blood-bought children of God, we will be recognized and honored in heaven, and share in the same glory that is accorded to Christ.  And, having been prepared and equipped through our earthly training process, we will be ready to move into positions of authority as co-regents, or rulers, with Christ, when He sets up His kingdom, first here on earth and later in eternity.

As you can see, Salvation is, in no way, just an antiquated theological doctrine or religious crutch for the needy; neither is it merely about having one’s sins forgiven so he or she can bypass Hell and go to Heaven.  It is the one and only way that we can realize our God-ordained destinies of becoming the Children of God—destinies made possible solely through the sacrificial death of God’s Son, Jesus Christ—and ones which will become realities once we have been Born Again.

A message worth considering from Francesca Battistelli…

4 thoughts on “Salvation: What It Is and Why We Need It”