Salvation: How Do We Get It? | His Truth, My Voice 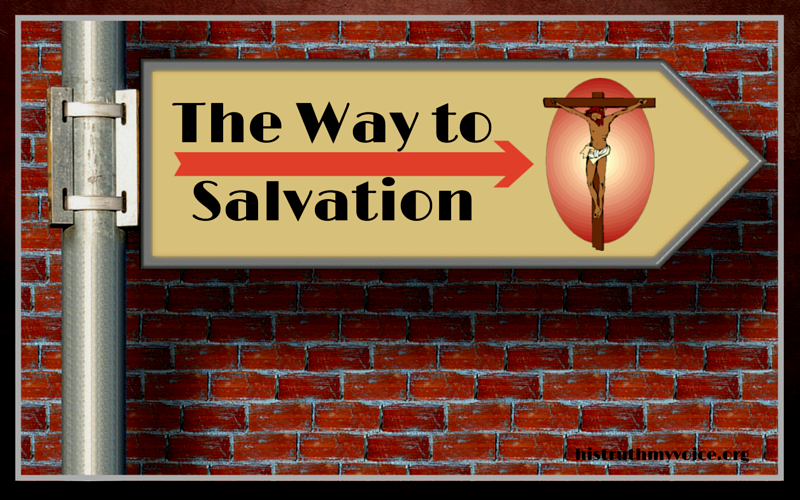 Now that we have a better idea of what Salvation is and why we need it, let’s stretch our spiritual muscles a little further as we learn how to appropriate this wonderful gift for ourselves, through something called the New Birth.  Although some may consider the “head” knowledge of Salvation we gained in our previous workout session to be sufficient, that mere intellectual knowledge will prove to be woefully inadequate in providing us with the foundation we will need for our upcoming exercises in practical Christianity.  For the purposes of this program, then, we can gain an experiential knowledge of Salvation (if it hasn’t been done already) through an active participation in each of the following four exercises…

Exercise #1—The Mandate for the New Birth 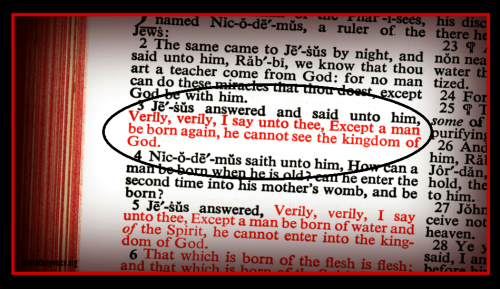 The Mandate for the New Birth

In this statement, Jesus made it clear that there is a fixed gulf existing between our fleshly and spiritual beings; and, although everyone born into the natural world will initially be born into a fleshly or physical state, only those who have been regenerated by the Spirit of God will be born into life in the Spirit.  Here, then, we find the mandate, given by Jesus Himself, that anyone who hopes to see God and participate in His kingdom must be born again. However, what we aren’t told here is the reason why this New Birth is necessary, or the way that we go about experiencing it.

Exercise #2—The Spiritual Dynamics of the New Birth…

If we are to understand the reason for Jesus’ mandate, we first need to learn about the dynamics involved in the New Birth; dynamics which have everything to do with regeneration.  Since, by definition, regeneration is—the act of bringing something into existence again—that is, to form again, or to be made new—for us…

…Regeneration is the act by which our dead spirits are brought back to life again by the Holy Spirit of God.

But, why is this necessary?

To answer to that question, we must go all the way back to the beginning of human history; back to the time when Adam and Eve disobeyed God in the Garden of Eden.  That’s  when their spirits, as well as those of all of their future descendants, died because their sin caused them to be separated or cut off from God.  This meant  that every human being who would ever live, with the exception of Jesus Christ, would be born spiritually dead—or, with a spirit cut off from its source of life in God.

In his book, The Spiritual Man, Watchman Nee explains what is meant when we speak about this state of spiritual death…

…when we say the spirit is dead it does not imply there is no more spirit; we simply mean the spirit has lost its sensitivity towards God and thus is dead to Him.  The exact situation is that the spirit is incapacitated, unable to communicate with God…it remains in a coma as if non-existent.

Because of this spiritual death, no descendant of Adam has ever been able to have, much less maintain, a relationship with God while remaining in his or her natural or fleshly state.  The New Birth, then, is what occurs when God’s Spirit brings a man’s spirit back to life and restores that man’s lost relationship to God, making it possible for him to communicate with God once again.  But—and this is a very BIG BUT—before this can happen, there are certain legalities which must be addressed, legalities involving our repeated violations of God’s laws.

Exercise #3—The Legalities Involved in the New Birth…

As we learned back in Salvation—What It Is and Why We Need It, each of us has, throughout our lives, repeatedly offended God by violating His laws, or His codes of acceptable moral and spiritual conduct; and, in the process of that, we have unwittingly erected a barrier—or a wall of offence—between Him and us, something which makes any relationship between us impossible.  Until such a time as we confess our faults—or, until we agree with God about what we have done wrong, and seek His forgiveness—we will continue to be “cut off” from Him; losing whatever opportunities we may have had to get to know Him and to experience His grace.  Thus, the elimination of our offenses against God, as well as the removal of the wall which those offenses have created, is what the New Birth is all about. 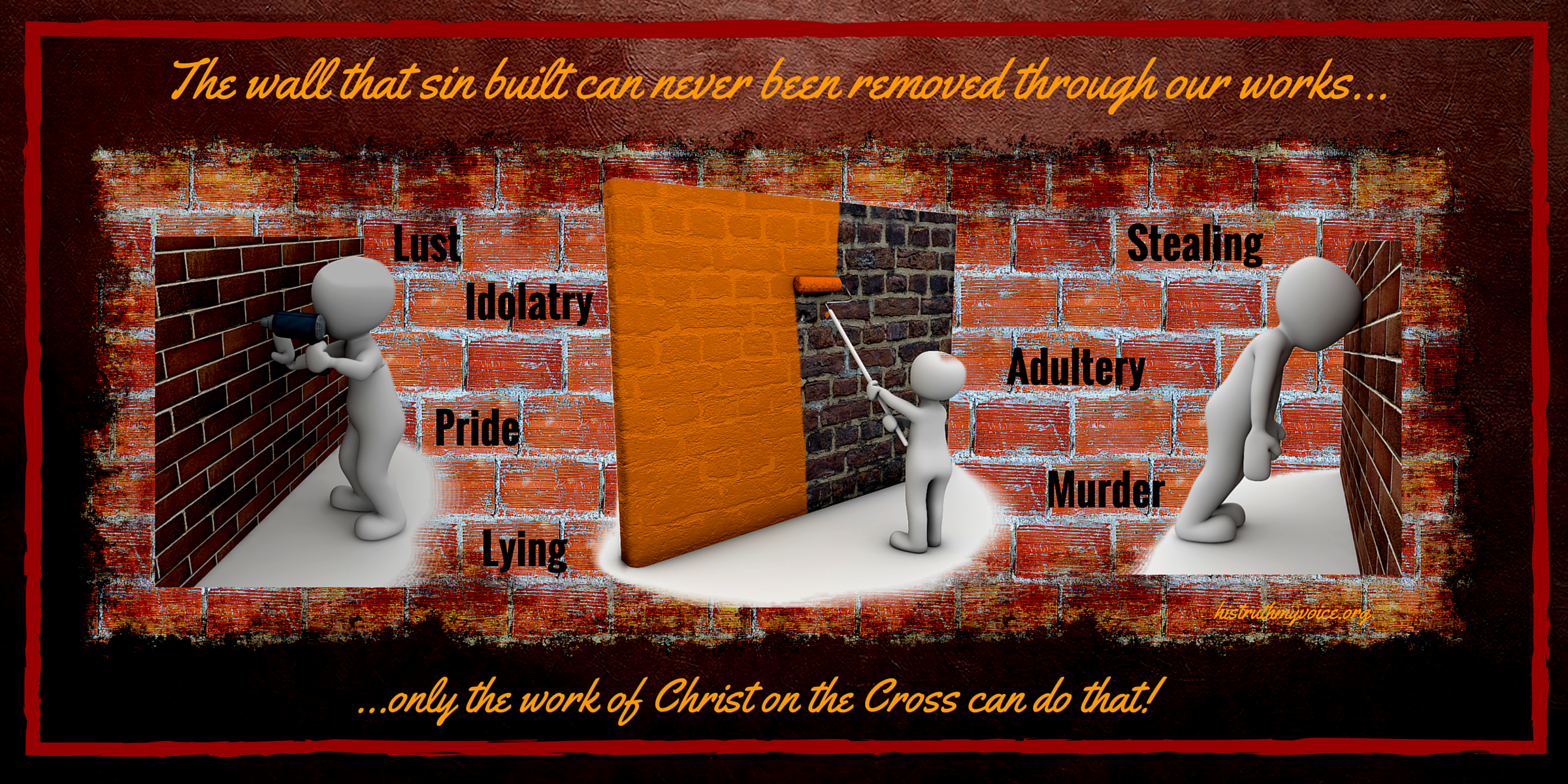 The Wall of Offense Between God and Us

Unfortunately, because most of us have no concept of what God’s righteous requirements for relationship with Him are, we don’t know what we have done to offend Him.  Most of us have lived our lives according to the codes of conduct that we have acquired from our parents, picked up from our friends and associates, or created for ourselves in response to the ever-changing circumstances of life.  Unlike God’s immutable standard of holiness, our concepts of what constitutes right and wrong have been derived from very human and fallible sources and, as a result, tend to have very nebulous boundaries.  Consequently, the principles by which we live are often adapted to the situations in which we find ourselves at any given moment, with what is true and right in one situation differing from that in another.  With backgrounds steeped in such a relativistic system of ethics, how are we to know for sure what God’s requirements are; and, how can we understand what our offenses against Him have been?

The only way we can know how we have missed God’s “mark” for acceptable behavior (with “sin” being defined as “missing the mark” of God) is through the Bible, where God has set forth His standard of righteousness, or right living, in Exodus 20: 1-17—a standard we know today as the Ten Commandments.  In these commandments, He makes it clear that, in order for us to have a spiritual relationship with Him, we must meet certain conditions: 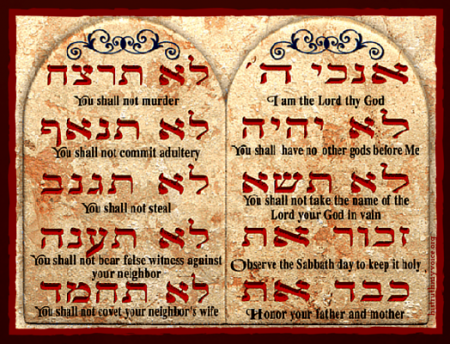 The Laws of God

Since we all have violated these laws at one time or another, how can we, as naturally unrighteous people, meet such rigorous demands for righteousness and enter into a relationship with God?  In all honesty, we can’t—at least, not on our own.  We must have the help of Someone Else who can meet these demands on our behalf; Someone who can bridge the gap between God’s holiness and our sinful condition, thereby making a relationship between God and us possible.

Since God is the only One who completely understands the strict demands of His law, as well as man’s total inability to meet those demands, He took it upon Himself to create a plan by which Someone named Jesus could bring God and man together.  And, for us to understand how this plan works, here is what we need to know:

If you aren’t sure that you have experienced this New Birth, then let me urge you to go to God, acknowledge the offenses which have kept you spiritually dead and alienated from Him, and ask Him, for Jesus’ sake, to remove them.  When you do, the Holy Spirit will come to live within your spirit and you, too, will be born again as a child of God. 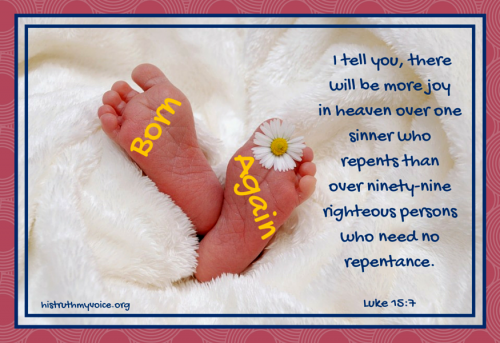