Judgment of Nations | His Truth, My Voice 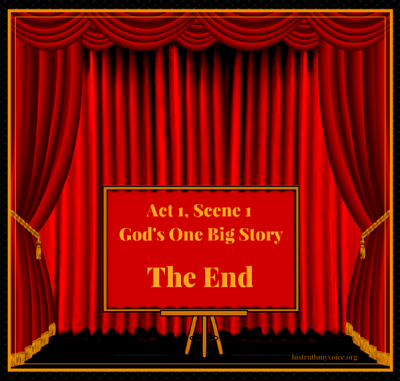 I know it may be hard to believe but, now that our critique of Vignette #9 has been completed, Act 1, Scene 1 of God’s One Big Story has finally come to an end.  Of course, this means that it’s now time for us to climb back on board the Truth Train, leave the first of the fourteen stages in our production, and move on to Stage #2.

We have spent a considerable amount of time at Stage #1, and that’s because the part of the Bible being presented here, covering the first eleven chapters in Genesis, is one of the most important parts of the entire Bible Story.  Some of the reasons for this are… 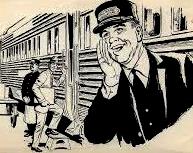 That being said, let’s all return to our seats on the Train and get comfy; for, as we journey from Stage #1 to Stage #2, we will again be Making the Most of Our Travel Time by reviewing the first three of these reasons, which will lead us into a preview of the Overture that follows.

Back in …Where It Is Showtime for God’s One Big Story!, we found that our introduction to God began in Genesis 1:1, the very first verse of the Bible…

…In the beginning, God created the heavens and the earth…

…and, from this very brief but powerful verse, we learned some key pieces of information about the Being who is both the Author and the Main Character of the Book…

Then, during the rest of this chapter, we learned that…

As for God’s Creation of the Earth, we learned that this was accomplished in a very orderly and systematic way over the course of six days; with Him, during the first three days, calling into being the Kingdoms of Light and Darkness, Sky and the Sea, and the Land; and, during the last three days, making and creating the Rulers over those Kingdoms in the forms of the Sun, Moon, Stars, Fish, Fowl, and Animals.  In Between the Vignettes, we learned that this massive undertaking—done with such precision and attention to detail—was for the sole purpose of providing Man, The Capstone of God’s Creation, with an ideal place to live.

In Another Learning Interlude, we learned that once He had their earthly home ready, God set about the task of Creating the Man and Woman who would be living there; fashioning them into male and female beings so much like Himself that they could readily be adopted as His children.  However, when we got to the Fundamentals of the Fall, we discovered that just looking like God was not going to be enough to guarantee their adoption into His Family.  Before that could take place, the Man and Woman would have to be Holy, like God—something that would be proven if only they could maintain their innocence in the face of testing.  Unfortunately for them, for the earth, and for us—they failed, with disastrous results. 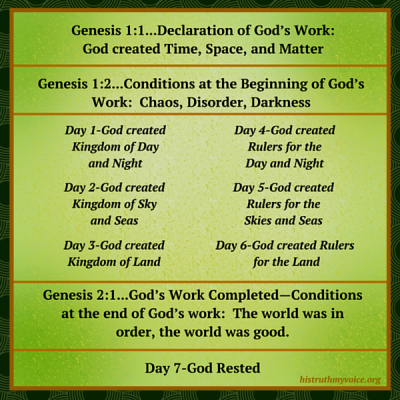 Up to this point in our Story, our Cast of Characters has consisted of…

But, with the testing of Adam and Eve, another very shadowy Character made his way onto our Stage.  Initially appearing in the guise of the serpent who tempted the first Man and Woman into sinning, he was none other than Satan—aka Lucifer, the Devil, and the dragon mentioned in Revelation 20:2.

Although he has remained largely invisible, Satan’s activity in and influence upon our Story has been evident throughout it.  For, as we learned in…

The Fruit of the Fall,
Sowing, Reaping, and the Nature of the Trees,
Fruit Doesn’t Fall Far From the Tree, and
Closing the Case on Cain and Abel…

…he was no doubt instrumental in inciting Cain to murder his righteous brother, Abel, and in Cain’s refusal to repent.

As a result, Patterns of Generational Sin and Patterns of Conflict Between the Righteous and the Wicked, which would go on to wreak havoc in all future generations, became established—something which was made evident to us in…

Our Lineup to the Flood,
Searching for Truth in the First Book of Begats,
But Noah…
Obedience Doesn’t Come Cheap, and
The Washing of the World…

…where life on the earth had become so corrupt that God decided it must be destroyed with a universal Flood.  And, later in…

…we witnessed Satan’s reappearance on our Stage, initially in the person of Nimrod—the first incarnation of the Antichrist in our Story—and then, as the power behind the creation of Mystery Babylon—the spiritual Harlot of false religion who would eventually lure the nations of the world away from the worship of the one true God, and into the worship of the Devil.

4.  The Overture of the Story

Before our production of God’s One Big Story began, we learned from All the World’s a Stage—and Life Its Cosmic Drama that the device used in its presentation was going to be the same type of “story-within-a story” device so often used in the works of William Shakespeare.  For our purposes, this meant that the stories of real people recorded in the Bible were going to be used by God to tell more than one story—that is, in addition to the Earthly Level Story being recounted, elements from each individual story were going to be used to help tell the Prophetic Story taking place on a Heavenly Level.  In Act 1, Scene 1, this meant that every event from the Creation of the World to the Rebellion at Babel, and the subsequent division of the people into Nations, would have its spiritual level parallel; a parallel forming a theme or motif that would reappear later in the Story.

This concept will become easier for us to grasp if we think of the first eleven chapters of Genesis as the Overture to the entire Bible.  In much the same way that an overture introduces to the audience the musical themes which will be running throughout an opera or play, Genesis 1-11 introduces us to the spiritual themes which will be played out in the rest of the Bible Story.

In the event that this concept still proves to be a little difficult to understand, perhaps this graphic will help show how the events in Scene #1 prefigure some of the most important future episodes in the Story… 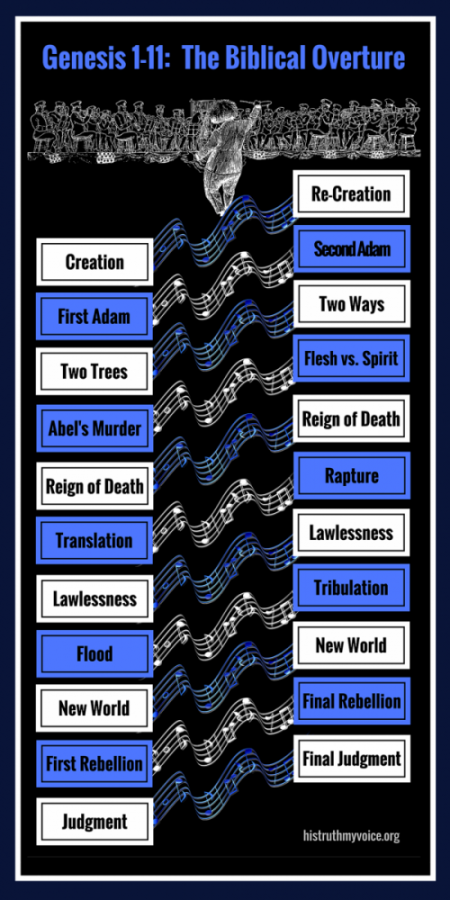 Now that we have an idea of the real meaning and significance of the opening scene of our Story, we can move forward to Stage #2, better prepared to appreciate  what Act 1, Scene 2 is all about.

Whenever I think of an “overture,”  the Bugs Bunny Theme always comes to mind–so I just had to include it at this point in our Story.  I hope you enjoy this brief bit of levity…