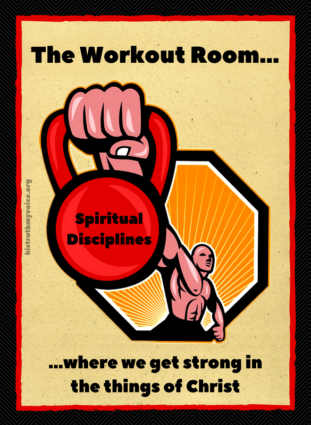 So far, in our efforts to become more spiritually fit, we have successfully worked our way through three of the four levels of exercise in our Workout Program; where, at…

Level 1, we covered the basics of our Faith; learning how, through Salvation, we are Redeemed from Sin and Death, and adopted as children into the Family of God.

Level 2, we dealt with Sanctification; or, the life-long training process by which the Holy Spirit transforms us from the Sinners we once were into Holy Sons and Daughters of God.

Level 3, we learned about Service; or, the Work of God that we, as His Children—the Church—have been commissioned to carry out. It was here that we were introduced to the concept that…

Since this last matter deals with Spiritual Warfare, something which we have only recently touched upon, we will make its study the objective of this fourth and final Level of Exercise in our Program—a Program which, when completed, will have helped us…

It is through this progressive pattern of growth—from Position to Person to Purpose to Power—that we have advanced from our original state of spiritual infancy to God’s more highly desired state of spiritual maturity, becoming better equipped along the way for our eternal destiny with Jesus Christ. 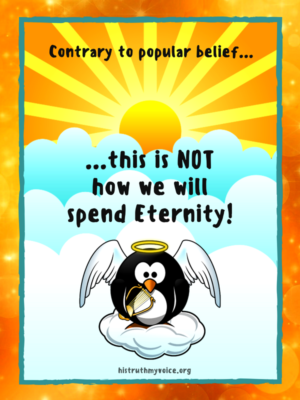 What is this destiny for which we, as the Children of God, are presently being equipped?   Contrary to one of the more popular conceptions of what life will be like in the hereafter, we will not be floating around on a cloud, with a crown on our heads and nothing better to do than strum on our harps for all eternity.  Not only is this a perfectly wasteful—not to mention boring—way to spend one’s everlasting life, but it in no way compensates us for all of the hardships we suffered through during our earthly sojourns.  And, it certainly doesn’t call for any specialized equipping on our parts to prepare for it.

On the other hand, the destiny that God has planned for us is a gloriously challenging one.  In keeping with His divinely ordained principles of Sowing and Reaping, it is one that will provide us with levels of rewards commensurate with the levels of faithfulness we have demonstrated during our times of training on the earth, and elevate us to positions of authority in the coming Kingdom of God.  From these positions, we will exercise the Dominion originally gifted to us by God, lost to us as a result of the Fall, and restored to us through the death and resurrection of Jesus Christ.

Destined for Dominion, Subjected to Slavery

We first learned about this matter of Dominion during one of our visits to the story of Adam and Eve.  For, it was there that, upon his creation, Man—as both Male and Female—was commanded by God to fill the earth with people, and to rule over everything in it.  This Right to Rule, however, was lost when Adam, as a result of his disobedience to God, forfeited his Position of Power—a position which Satan immediately claimed as his own.

In his classic book, Destined for the Throne, the late Paul Billheimer explains some of the legal issues involved in this transfer of power…

The entire universe is governed by law…God’s grant of authority and dominion over the earth to man was a bona-fide gift.  This authority and dominion became legally his.  What he did with it was his own responsibility.  If, so to speak, he ‘fumbled the ball’ and lost it, God could not lawfully step in and repossess it for him.[1]

…if you present yourselves to anyone as obedient slaves, you are slaves of the one whom you obey, either of sin, which leads to death, or of obedience, which leads to righteousness.

Therefore, when Adam chose to obey Satan instead of God, he became Satan’s slave.  And…

As a slave of Satan, Adam lost all of his legal rights, not only to his person but also to his domain.  This gave Satan legal authority to rule over man and the earth.  If Satan’s dominion was to be revoked, a way had to be found to redeem fallen man and recover his lost authority without violating universal principles of justice.

No angel could enter the contest because these legal rights were never his.  Thus a member of Adam’s race had to be found who could qualify to enter suit in universal court and wrest Adam’s lost heritage and dominion from Satan.  The government of the earth had been given to man.  It was lost by man.  It could be legally recovered only by a man.[2]

But where was such a man to be found?  To qualify for the task at hand, he would have to be a full-fledged human being; and yet, because Adam and all those who would eventually descend from him had become the slaves of Satan, he would have to be sinless in order to be free from Satan’s control…

To the human mind the situation was hopeless, but God found a way.  ‘When the fullness of the time was come, God sent forth his Son, made of woman, made under the law, to redeem them that were under the law, that we might receive the adoption of sons’ (Gal. 4:4).  God solved the problem by the Incarnation.

Since Jesus was conceived by the Holy Spirit, the divine nature was present in Him.  Because he was sinless, Satan had no claim upon Him.  But because He was ‘made of a woman,’ He was an authentic human being and could therefore qualify as a bona-fide member of the human race to enter the legal fight to reclaim Adam’s lost estate.[3] 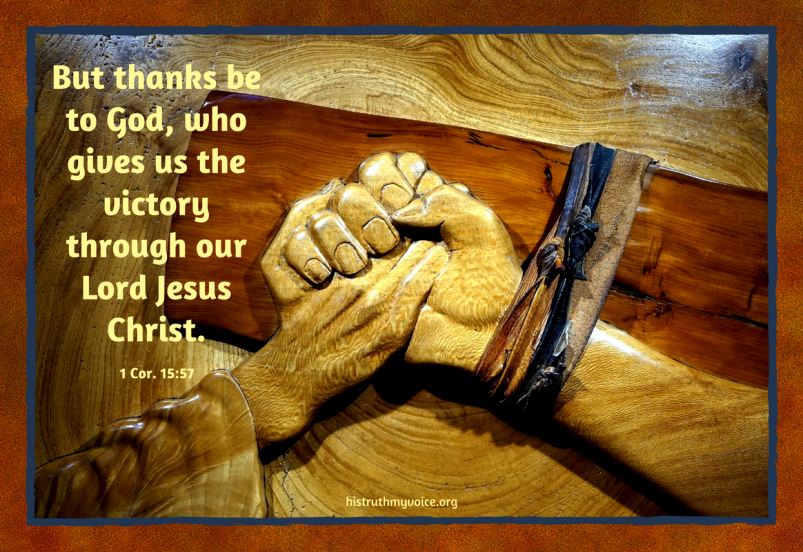 He Has Made Us More than Conquerors

The Spiritual Battle to the Cross

Although I can’t think of anyone who would willingly sign up for a task like this, the spiritual battle to win back our freedom that Jesus freely committed Himself to was one that was repeatedly characterized by humiliation, rejection, opposition, and affliction; which, when you put them all together, add up to a whole lot of suffering.

Just think of the humiliation involved when…

…Christ Jesus, who, though he was in the form of God, did not count equality with God a thing to be grasped, but made himself nothing, taking the form of a servant, being born in the likeness of men.  And being found in human form, he humbled himself by becoming obedient to the point of death, even death on a cross (Phil. 2: 5-8).

Or, the rejection He must have experienced when…

As for opposition, Jesus had that in abundance; for, even as a child, when He was perceived to be a contender for his throne, King Herod tried to have Him killed.  And later, during His earthly ministry, He found Himself constantly at odds with all factions of Jewish society…

And, when it came to affliction, no one has ever endured more.  Of Him, it was said that…

Surely he has borne our griefs and carried our sorrows; yet we esteemed him stricken, smitten by God, and afflicted.  But he was wounded for our transgressions; he was crushed for our iniquities; upon him was the chastisement that brought us peace, and with his stripes we are healed.  All we like sheep have gone astray; we have turned—every one—to his own way; and the Lord has laid on him the iniquity of us all.

He was oppressed, and he was afflicted, yet he opened not his mouth; like a lamb that is led to the slaughter and like a sheep that before its shearers is silent, so he opened not his mouth.  By oppression and judgment he was taken away; and as for his generation, who considered that he was cut off out of the land of the living, stricken for the transgression of my people?  (Is. 53: 2-8)

And, if all this wasn’t enough, from the time of Jesus’ temptation in the wilderness at the beginning of His ministry until the moment when He drew His final breath, Satan, in an effort to take Him captive through sin just like the first Adam, was constantly working to trip Him up…

The fallen Lucifer, once the Light Bearer, the guardian of the throne of God, the highest of all pre-Adamic created beings, marshaled all of the available resources of the underworld in an effort to break down the allegiance of the God-man to His heavenly Father.  One weakness revealed, one thought of rebellion or self will entertained, and all of Jesus’ efforts to repossess the world and its enslaved race from the usurping god of the world would be lost.[4]

But, Praise God, in spite of all this pressure, Jesus didn’t give in; for…

When Jesus died without failing in the smallest detail, His death resulted not only in defeating Satan’s purpose to obtain a claim upon Him—it also canceled all of Satan’s legal claim upon the earth and the whole human race…

Therefore, since Calvary, Satan has absolutely no rights or claims upon anyone or anything.  Whatever authority he carried with him on his banishment from heaven passed into the hands of the new Man along with the lost heritage of Adam…[5] 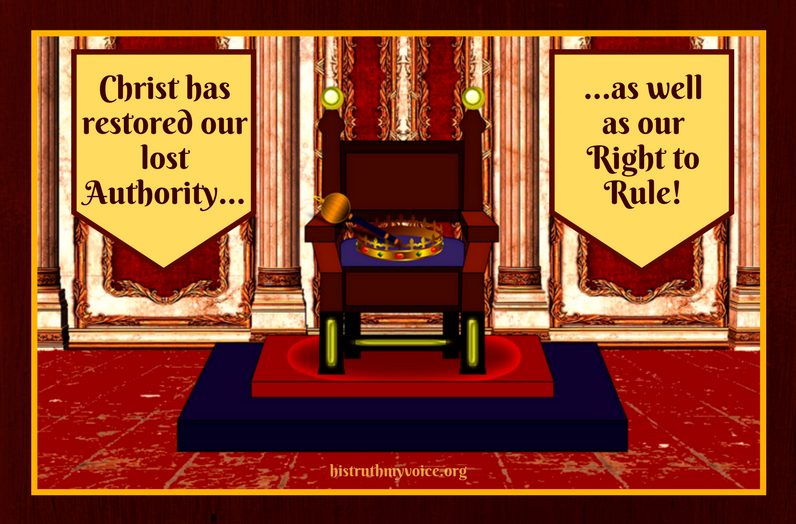 So We Can Rule and Reign with Him Throughout Eternity

It is this authority that Jesus restored to His disciples; the same authority…

…to tread upon serpents and scorpions, and over all the power of the enemy, and nothing shall injure you (Luke 10:19)…

…that Jesus delegated to the seventy-two He sent out to proclaim the Kingdom of God—and, it is the same authority that we possess today.  For…

As individuals we have authority over all the combined powers of the enemy.  This is an incredible, wonderful truth.  Everything at Satan’s disposal—every demon, every coven, every cult and religion, every work, and every influence—is subject to the authority given to us by Jesus.

When Jesus rose from the dead after ripping the usurped authority from Satan’s hands, He did not immediately go to heaven.  He stopped off to see the eleven remaining disciples…Jesus handed to them the authority He had taken from Satan.  The authority legally changed hands once more and belonged to man again.[6]

This truth is what we need to keep at the forefront of our thinking as we approach our upcoming exercises in Spiritual Warfare—because our success in any battle will be totally dependent upon our acknowledgement of the One who has already won the victory.  Satan and his demons certainly know who it is; for, it was Jesus who, after overcoming every form of Spiritual Warfare in His life–on the Cross and through His resurrection…

…disarmed the rulers and authorities and put them to open shame, by triumphing over them (Colossians 2:15).

Even so, Satan and his legions continue to fight on, using our ignorance of the authority in Christ as one of their chief means of success.  Let’s determine not to give them that critical edge over us; always bearing in mind that, in whatever situation we may find ourselves, the One who won the war for us has already been there on our behalf…

…For, we do not have a high priest who is unable to sympathize with our weaknesses, but one who in every respect has been tempted as we are, yet without sin (Hebrews 4:15).

Therefore…let us also lay aside every weight, and sin which clings so closely, and let us run with endurance the race that is set before us, looking to Jesus, the founder and perfecter of our faith, who for the joy that was set before him endured the cross, despising the shame, and is seated at the right hand of the throne of God.

Consider him who endured from sinners such hostility against himself, so that you may not grow weary or fainthearted.  In your struggle against sin you have not yet resisted to the point of shedding your blood.  (Hebrews 12:1-4) 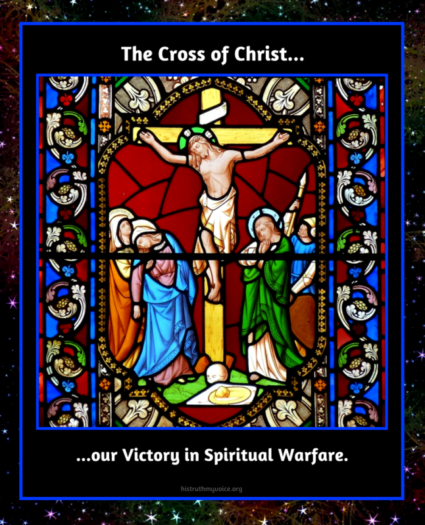 The War Has Already Been Won for Us by Jesus