the Word | His Truth, My Voice 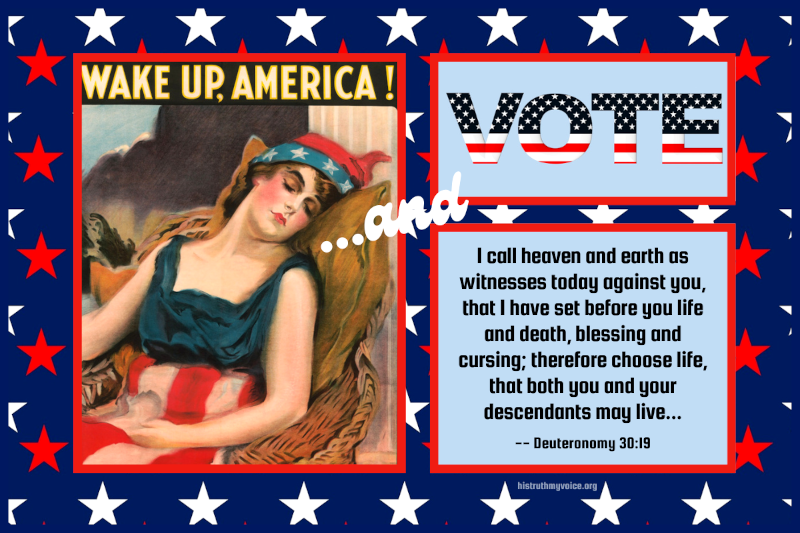 This is our word from the Word for this week–receive it and make your voice heard!

Our journey to the Land of Revelation Knowledge has brought us here, to Stage #1, where Vignette #1: The Creation of the World is about to begin.  As the action of God’s One Big Story starts to unfold, we need to keep in mind that the events we will be witnessing here have been designed to serve more than one purpose.  Not only will they be teaching us important Life Lessons through the actions of the characters on the Earthly Stage before us, they will also be contributing to the story-behind-the-story taking place simultaneously on the Heavenly Stage above us.  More importantly, though, they will be providing us with priceless clues or insights into the very Person and Nature of God.  Now, with that being said, it is finally “Showtime” here at Stage #1—where it is time for our Earthly Story to get under way! 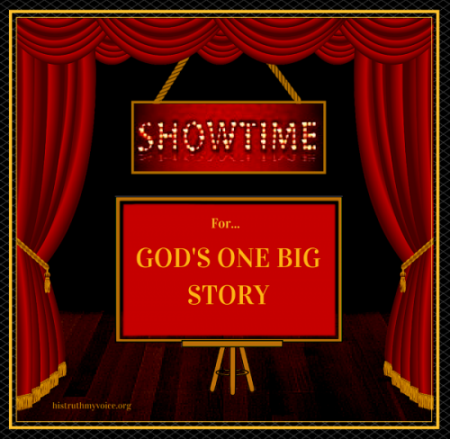 As the curtains open on the first part of our Story, we find ourselves viewing a stage that is completely and eerily dark. Not only is the stage shrouded in darkness, so is the rest of the theatre; a situation which gives rise  to several minutes of uneasiness for us as we wait anxiously for something to happen.  Suddenly, the blinding darkness, along with its accompanying deafening silence, is shattered by the sound of the deep, resonant Voice of an off-stage Narrator uttering Ten of the most powerful, revealing, and important Words ever spoken…

…In the beginning, God created the heavens and the earth.

Time, Space, and Matter all Come Into Being at the Word of God

With these Ten Words, God—identified here as Elohim, the God who is Plural in Person but Singular in Purpose—steps out of eternity to create what will become the Stage for all Human History.  Offering no explanation for who He is or where He came from, He immediately begins to demonstrate His Presence, His Power, His Wisdom, and His Sovereignty by laying out Time, intersecting it with Space, and then creating Matter, all out of nothing!

While these telling Words are still reverberating throughout our darkened theatre, our attention is suddenly captured by the roar of a mighty wind.  We soon learn that this wind is none other than the Spirit of God Himself, hovering over, stirring up, and activating waters that are still invisible to us due to the all-pervasive darkness.  In His hovering, we somehow sense that the Spirit is poised, prepared, and waiting with anticipation for that which He knows is just about to occur.

Then, like the sound of a million thunder claps, we hear the Voice of God speaking forth the first of another set of Ten Words—His Ten Words of Creation, which begin with…

…Let there be light! 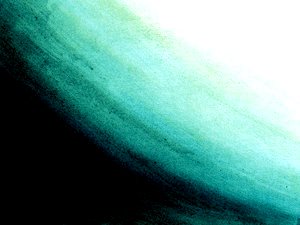 “Let there be light…”

And, because “…the unfolding of [His] words gives light (Ps. 119:130),” light does appear; light that is diffused throughout the Stage, revealing what can only be described as a massive, formless, and useless watery Deep.

We soon learn, though, that merely bringing Light into existence isn’t the only work that God intends to do; for as soon as He has spoken it onto the Stage, He proceeds to:

As the First Day of Creation comes to a close, the Stage we are looking upon is still a place of chaos and confusion; however, the Darkness is now contained and we have enough Light to see the Works of God that are yet to come.  Although we still cannot see Him, because of what He has done, we now know that God is, that God is Everywhere, that God is All-Powerful, that God is All-Knowing, that God is a Moral Being as well as a Judge, and, that God is Triune in His Person—or, in other words, He is God, He is the Word, and He is the Spirit—all of which is quite a lot for us to have learned in so short a period of time.

As the darkness of the First Evening passes and the light of the Second Day takes its place, God resumes the work that He began on Day One.  Because there is still a massive, formless, and aqueous Deep occupying our Stage, He begins by transforming it into something more productive through the pronouncement of His Second Word of Creation…

…Let there be an expanse in the midst of the waters, and let it separate the waters from the waters. 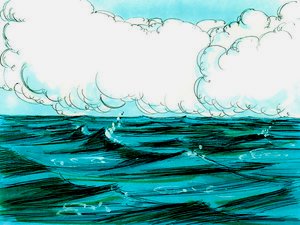 “Let there be an expanse in the midst of the waters…”

At once, we see the waters part as an expanse or a firmament—otherwise known as an atmosphere or sky—is inserted in between them; an act creating a vapor canopy above the expanse, while leaving the waters beneath it in their original amorphous state.  After God’s designation of this expanse as Heaven, the work of Day Two comes to an end and its Evening begins.

Because the reformation of the primordial waters is still only half complete, as the Third Day of Creation commences, God begins transforming the waters remaining beneath the Heavens.  Once again, He does this through the power of His Word—His Third Word of Creation…

…Let the waters under the heavens be gathered together in one place  and let the dry land appear. 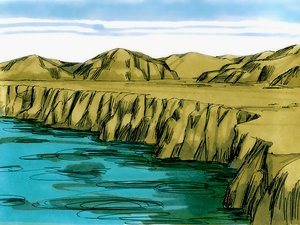 In obedience to this command, the waters immediately begin to come together, while a mass of dry ground rises up and out from among them.  Again, God separates and divides, assesses what He has done and declares it to be good, and again, exercises His authority as Creator by naming the dry land Earth, and the waters Seas. 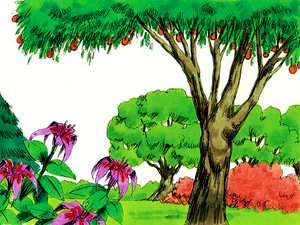 “Let the earth bring forth vegetation…”

Although the formation of the Seas and the Earth has been quite an undertaking, the work of this Day is by no means over; for, no sooner than the Earth is given its name, God speaks His Fourth Word of Creation when He commands it to produce vegetation in the form of plants, shrubs, and trees; the first of the living things to come forth from the Earth, containing seeds within themselves that will enable each of them to reproduce “after its own kind.”  This design principle is so important that it is repeated eleven times throughout the remainder of the Creation Story; not only establishing the basic physical law of reproduction for everything in God’s material creation, but also becoming a picture to us of God’s spiritual law of reproduction, as it is later spelled out for us in Galatians 6:7-8:

At this, Day Three comes to a close, and as it does, we need to pause for a moment to consider what God has accomplished so far.  He has, through the giving of His Word and the empowerment by His Spirit…

In other words, from nothing, He has progressively and systematically created realms of existence within the natural world that are now standing in the need of their Rulers.

In response to this need, and with the arrival of Day 4, God sets about the task of making Lights to rule over the kingdoms of the Day and Night by speaking His Fifth Word of Creation… 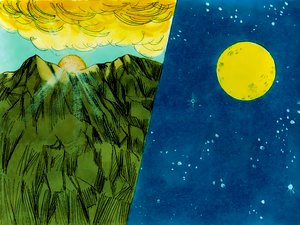 “Let there be lights…to separate the day from the night…”

At the end of Day 4, and having received their Rulers, the Kingdoms of the Day and Night are now complete.  However, because the two remaining kingdoms are still without their designated lords, as Day 5 begins, God proceeds to remedy that situation as He speaks His Sixth Word of Creation…

…Let the waters swarm with swarms of living creatures, and let birds fly above the earth across the expanse of the heavens. 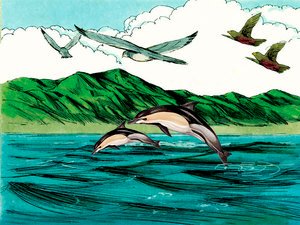 “Let the waters swarm with living creatures, and let birds fly above the earth…”

Once this Word goes forth, God Himself begins creating the very things that He has just called into being—that is, every form of fish and fowl, according to its kind, that will rule over the seas and the skies.  Upon His completion of this task, and following His assessment of His work to be good, God then goes one step further, by speaking a Seventh Word of Creation, a Blessing upon all of those things that He has just created…

…Be fruitful and multiply and fill the waters in the seas, and let birds multiply on the Earth.

And, with the Rulers of the Seas and the Skies so blessed, the Fifth Day of Creation comes to a close. 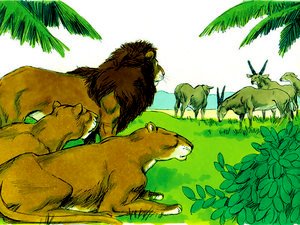 Since the Earth still in need of its Rulers, at the onset of Day Six, God speaks yet another Word of Creation—His Eighth—saying…

As this Word is still echoing throughout the atmosphere, God begins fashioning the Creatures that will soon be making the Earth their home.  Like all of the other things that He has so recently brought into existence, each of these Creatures is designed to reproduce “after its own kind”—and to Rule over its respective sphere on the Earth.  Once again, when He is finished, God pronounces this work to be good.

At this point in the production, as we sit awestruck and overwhelmed by the magnitude of the sights, sounds, and changes that have taken place on the Stage before us, it is hard for us to imagine that God could or would do anything more spectacular, or add anything more significant, to that which has already been done.  And yet, as we very quickly learn, He has more work—a special work—planned for this, the Sixth Day of Creation. 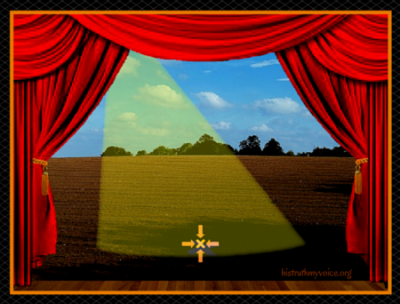 We get our first indication of this when a spotlight suddenly begins to shine on the Stage from overhead, focusing on what seems to us to be a rather non-descript plot of land.  Once our gaze has been directed to this particular patch of ground, we hear the Voice of God again as He speaks His Ninth Word of Creation…

…Let us make man in our image, after our likeness.  And let them have dominion over the fish of the sea and over the birds of the heavens and over the livestock and over all the earth and over every creeping thing that creeps on the earth.

At this pronouncement, we all move to the edges of our seats, where we wait expectantly with wonder and excitement for the unveiling of this new work by God;  instead, we are stunned to see the curtain suddenly drawn across the Stage.  Although we can see nothing, we hear once more—amid all the gasps and groans of disappointment from the audience—the Voice of the Narrator, as he boldly yet reverently proclaims…

…So God created man in his own image, in the image of God he created him; male and female he created them.

Then, immediately after this, we hear the Voice of God speaking His Tenth and Final Word of Creation, in the form of another Blessing, saying…

…Be fruitful and multiply and fill the earth and subdue it and have dominion over the fish of the sea and over the birds of the heavens and over every living thing that moves on the earth.

At this, all sounds cease to emanate from the Stage, the lights in the theatre go up, and we begin to realize that Vignette #1 is now over; and that this—the most important part of God’s Creation Story—will have to wait until the start of Vignette #2.  As disappointed as we are by what seems to be an unnecessary delay in the telling of the Story, this time between Vignettes will actually provide us with some much-needed time to reflect on all that we have experienced and learned so far.

As we prepare to do that though, let’s first join with Carman in rejoicing that “There is a God”…