Theatre | His Truth, My Voice

A Review of Our Story So Far…

Now that we have completed our critique of the story of Cain and Abel, it is time for us to move on to the next Vignette, or mini-story, in our presentation of “God’s One Big Story.”  In order to put things into perspective, and as a benefit to those who may be new to our group, I think it is a good idea to do a brief recap of our story so far.

Here at His Truth, My Voice, we are currently undertaking a guided tour of the Bible, a tour which we have been referring to as “The Journey into the Land of Revelation Knowledge.”  We have named it this because, in going deeper into the Word of God, we will be traveling to places where the priceless revelations of who God is, who we are, and the parts we are to play in His wonderful Love Story of Redemption will be made known to us.

In order to aid us in our understanding of this Story, it is being presented to us in the form of a Play, consisting of Two Acts, each containing Six Scenes, which are separated by one long Intermission.  The Scenes and Intermission are being acted out on a series of Fourteen Stages and, at present, we are at Stage #1 where Vignette #5 of Act 1, Scene 1 is about to get underway.

In Scene 1, we have been introduced to God in His role as “The Celestial Suitor”—the Supreme Being whose ultimate goal is to have a spiritual family to love for all eternity.  Since a family is naturally made up of a Husband and a Wife who have children, in this scene (covering the first eleven chapters of Genesis), God will create the world of nations, from which He will choose one—Israel—to be His Wife.  It will be through His relationship with her that His Son will eventually be born into the world; and, it will be through His Son that God will one day obtain the family He has always desired.  Thus far, this is what God has done toward the realization of His goal:

This brings us up to date in our Story, and to Vignette #5, which covers the material contained in Chapter 5 of Genesis.  While there are many who would consider this to be one of the most boring chapters in the Bible, I hope to show you that there are some important things to be gleaned from its rather repetitious presentation of information. 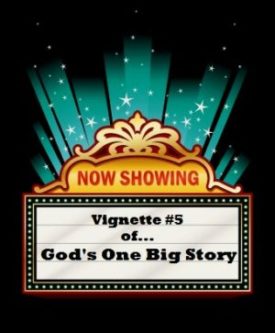 With that being said, the time has come for the next installment of our Story to begin—and for the lights in the theatre to dim and the curtains to part once more.  As they do, we find ourselves looking upon a Stage that is pretty much in the same state as when Vignette #4 ended.  The major difference is that Cain and his line of descendants have moved from the front of the stage to the back, forming a line across the rear of the stage.  The spotlight, which was previously on our right, has moved to our left, and is once more focusing on Adam, as we hear our off-stage Narrator begin his recitation with…

This is the book of the generations of Adam.  When God created man, he made him in the likeness of God.  Male and female he created them, and blessed them and named them Man when they were created.  When Adam had lived 130 years, he fathered a son in his own likeness, after his image and named him Seth.

At this, we see Seth walk across the stage and stand next to his father.  As the spotlight moves to highlight him, we hear the Narrator speak again, saying…

The days of Adam after he fathered Seth were 800 years, and he had other sons and daughters.  Thus all the days that Adam lived were 930 years, and he died.

This scene is then repeated five more times, with only the names and years being changed, and with our Narrator continuing in his very formulaic fashion…

Up to this point, everything has been going along monotonously well, but it is here—at the seventh generation from Adam—that we find something unusual taking place.  Our Narrator explains this, using the most economical description possible, by saying…

In other words, unlike his predecessors, Enoch did not die but was translated out of his earthly realm of existence and into the heavenly realm of existence with God!  Then, without offering us any more to go on, and just as though this revelation was of little or no consequence, our Narrator once again resumes his narration with…

But, just as he seems to be falling back into the same droning pattern of…

When Lamech had lived 182 years, he fathered a son and called his name Noah…

…and the spotlight comes to rest on Lamech, we are surprised to hear a sudden outburst from him, as he makes this prophetic statement about his son…

…after which, our Narrator continues, as before, with…

Lamech lived after he fathered Noah 595 years and had other sons and daughters.  Thus all the days of Lamech were 777 years, and he died. 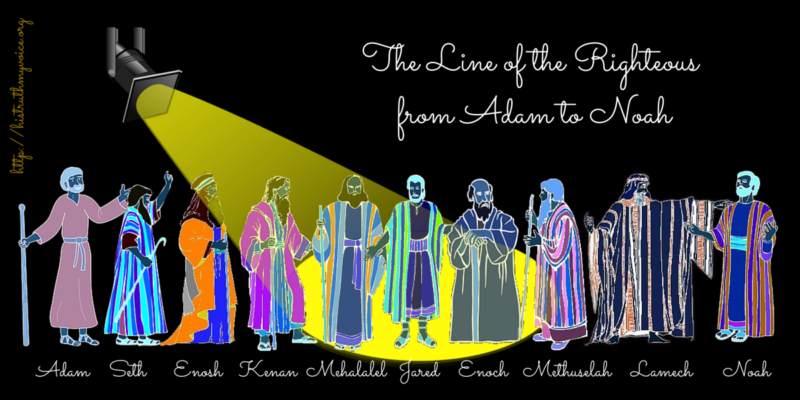 And, with the line of the righteous stretched out on the stage before us, Genesis 5 or Vignette #5 abruptly comes to a halt.  The curtains close and the lights in the theatre come up again–and, we are provided with yet another pause in our production for the purpose of critiquing what has just taken place in the presentation.  Although it is tempting for us to think that there is nothing worth critiquing in this very abbreviated episode, there is quite a lot that has been revealed here that will need to be discussed.  So let’s  take a moment and change once more out of our Theatre Patrons’ Hats and into our Theatre Critics’ Hats, and get ourselves ready to analyze the People, the Patterns, and the Precedents being established in this one, seemingly uneventful, passage of Scripture.

As Steve Green reminds us, let’s pray that when our lives are recorded  in God’s lineup of the Righteous, may all who come behind us find us faithful…