EXTRA! EXTRA! READ ALL ABOUT IT! | His Truth, My Voice

If there had been newspapers back at the beginning of human history, the events that we have been discussing recently might have looked something like this when reported in the local paper.

EXTRA!  EXTRA!
READ ALL ABOUT IT!
A Crisis in the Cosmos!

Yesterday, a tragedy of inestimable proportions took place in the Garden of God at Eden when a malevolent Being, previously unknown to the residents of the area, appeared in the Garden in the guise of a serpent and duped Adam and Eve, the overseers of the Garden, into disobeying the direct orders of God, thereby causing them to break faith with the Almighty.  This Being, known by such aliases as Satan, the Dragon, the Devil, and now, the Serpent, through his clever use of manipulative words was able to convince the human inhabitants of the Garden that their Heavenly Benefactor had lied to them, was withholding His best blessings from them, and was also purposely keeping them ignorant of the knowledge they would need in order to become divine like Himself. 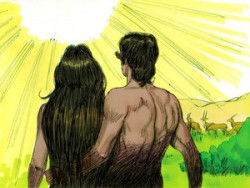 The Couple in a Happier Time

This story broke late yesterday afternoon after the Lord God arrived in the Garden at the appointed time and place of His daily meeting with the Adamses, but they didn’t show up.  A search was launched immediately, and the man and the woman were soon located, wearing makeshift garments of fig leaves and hiding among the trees of the Garden.  Upon questioning by the Lord God, it was revealed that Adam and Eve had eaten the formerly forbidden fruit of the Tree of the Knowledge of Good and Evil and, in doing so, had obtained first-hand knowledge of the sin of disobedience.  When asked to give an account of their actions, each one denied their culpability, with the woman blaming the serpent, and the man first blaming the woman, before blaming God for giving him the woman as his helper.

The evidence against the Adamses was so overwhelming that no lengthy legal delays ensued, and a trial was carried out on the spot.  Once the defendants had made their cases before the Lord God and the Judge of all the Earth, He rendered a verdict of guilty and their sentences were handed down immediately.

Beginning with the serpent, the Judge said:

“Because you have done this, cursed are you above all livestock and above all beasts of the field; on your belly you shall go, and dust you shall eat all the days of your life.  I will put enmity between you and the woman, and between your offspring and her offspring; he shall bruise your head, and you shall bruise his heel.”

“I will surely multiply your pain in childbearing; in pain you shall bring forth children.  Your desire shall be for your husband, and he shall rule over you.”

“Because you have listened to the voice of your wife and have eaten of the tree of which I commanded you, ‘You shall not eat of it,’ cursed is the ground because of you; in pain you shall eat of it all the days of your life; thorns and thistles it shall bring forth for you; and you shall eat the plants of the field.  By the sweat of your face you shall eat bread, till you return to the ground, for out of it you were taken, for you are dust, and to dust you shall return.” 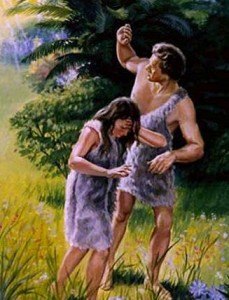 Being Evicted From Their Garden Home

In lieu of the garments of innocence which they were no longer qualified to wear, and because they had forfeited the right to wear the garments of righteousness which can only be worn by the children of God, upon leaving the proceedings, Adam and his wife were clothed with garments that the Lord God had made of animal skins for the purpose of temporarily covering their spiritual nakedness.  And, in order to keep them from returning to the Garden and eating of the Tree of Life, thus allowing them to live forever in their current fallen state, the Lord God expelled them from the Garden and placed a guard at its entrance to keep fallen man from partaking of the fruit of that Tree.

Although it is too soon to predict just how the events of the past twenty-four hours will impact life as we know it, there is already an obvious alienation between God and man; a separation which has undermined and overturned the very structure of our society, making it possible for fear, guilt, envy, blame, lust, and selfishness to gain entry into our previously peaceful Land of Paradise.   According to informed sources close to the throne of God, because man’s sin caused his spirit to die to the things of God, there will be a permanent breakdown in the communication system between man and God, and without direction from God’s Spirit, man will continue to live life according to the dictates of his flesh, rather than according to the will of God.  These same sources say that unless a way can be found to restore that which was lost, man and his kind will be eternally lost to the love and will of the Lord God.  Already, one innocent animal, believed by most to have been a lamb, has been slaughtered in order to cover the nakedness caused by sins of Adam and Eve—how many more innocent lives will it take before the curse can be removed and man’s relationship to God to be restored?

(Our thanks to the wire services of The Heavenly Herald for its provision of information that was used in this story.)