Loose Threads | His Truth, My Voice 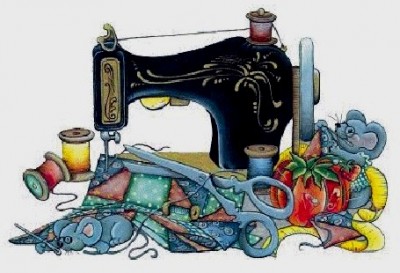 When I was very young, my mother took a job as a school bus driver so that she could buy two things:  a Royal typewriter and a Singer sewing machine.  Not long after she bought the typewriter, she enrolled in, and later completed, the typing and shorthand classes which were being offered by one of the local high school’s adult education programs.  Although I am sure she did exemplary work in those classes (my mother always brought home “A’s”), I don’t think she ever got to use her newly acquired skills in any vocational way.  That’s because my mother’s real gifts were in cooking and managing, and it was the combination of these gifts that made it possible for her to quit driving the bus and move on to managing the cafeteria at a newly opened school in our area.

Of course, she excelled at this job and, after serving successfully in this capacity at a number of different schools, she was eventually promoted to the position of Food Service Supervisor; a position which required her to oversee the management of nineteen of the school cafeterias in our city–and a position which she held until her retirement. Interestingly enough, although I can’t remember my mother ever using that Royal typewriter again, it was on that very machine that I later learned to type, using my mother’s old night school books to teach myself when I was just nine or ten years old. 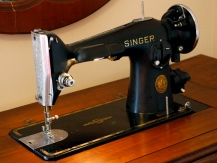 As for the Singer sewing machine, when my mother first got it, I know she used it a lot because I remember always being under her feet while she was sewing.  Probably as a way of getting me out from under her feet, she started giving me little things to do on my own–actually beginning the process of teaching me to sew, even though I was only about two at the time.

My mother’s interest in sewing started to wane, though, once she took on the full-time position as cafeteria manager, probably because she no longer had the time to sew.  I, on the other hand, was just getting started.  In fact, I took to sewing like the proverbial duck takes to water.  I was making clothes for my dolls and myself before I was eight and, by the time I had reached my teens, I was doing production type sewing–sewing flat-felled seams around all of the other students in my home economics class.

Much later, when I was grown and my first marriage ended in divorce–and I became the single mother of two little boys–I was able to use the sewing skills I had acquired to provide an income for my children and me.  Later still, when I went back to school to study architecture, along with the courses for my major, I took some courses in costume design and history and, once again, it was my sewing skills that opened a new door for me–this time building costumes for the theatre.  Then, the contacts I had made while working in the university’s theatre led me to a job building costumes for a large opera company in the southwest.  Upon my return home, one of the people I had worked with at the opera recommended me to the designer at our local theatre and she hired me to stitch costumes for that company.

Around this same time, a friend showed up at my door, saying she had a “word from God” for me–she told me that I should go to the large television ministry in our area and apply for a job.  I couldn’t imagine what I would do there,  but then, she told me that they had a wardrobe department and they needed a new tailor!  So, I applied, was hired, and that is where I have worked, off and on, for the past twenty-seven years.  Although I was hired initially as a tailor, I ended up doing just about everything associated with wardrobe, from design to maintenance, and was quite content in doing so—that is, until about eleven years ago.

As I mentioned in my reflection, My Journey to the Land of Blog, this was about the time my supervisor asked me to take over the scheduling for our department.  At first, I was very reluctant to take the job on because it meant using a computer and at the time, I didn’t even know how to turn one on and off.  But, guess what?  I took the job and it wasn’t long before I had learned my way around that once terrifying piece of machinery.  Why?  I think, for more than any other reason, it was because of the typing skills I had developed while working on my mother’s old Royal typewriter, when I was only nine or ten years old! 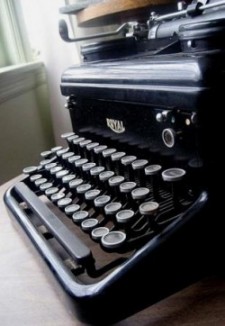 An Important Machine in My Life

Amazing, isn’t it, how one seemingly insignificant decision can make such a big difference in not just one, but in so many lives?  I am sure that when my mother decided to go to work to buy that typewriter and sewing machine, she had no idea of the long range implications of her decision.  No doubt, she thought she would use the typing and shorthand training to get a job in an office somewhere, and was probably planning on using the sewing machine to make her clothes for that job.  She had no idea at the time that, in taking the bus driving job to buy the items, she would learn about the job at the school, a job which would make better use of her gifts.  It was also one that would allow her to work while her children were in school and yet be at home when they were off for the summer, and one where she would ultimately be able to bless a lot more people.  And, as a job where she would only be wearing uniforms, there wouldn’t be any need for sewing!

At my mother’s funeral, I had the opportunity to meet one of the many people she made a difference to in her job when a gentleman, who had been the principal at one of the schools where my mother worked, waited in line to introduce himself to me.   This school had been a model one for our city and he told how, when they were preparing to open it, he had been asked who he wanted to manage his cafeteria.  He said that he had no idea, just to send him “the best”–and, he said, that is what he got when they sent him my mother!

In retrospect, the typewriter and sewing machine were probably just a couple of “loose threads” in my mother’s life—projects or goals that were started but never completed.  Surely, when she bought them, she thought she was buying them for herself; all the while not having a clue that, in God’s master plan, she was really buying them for me–and, that in doing so, she was ultimately setting the course my life would take.  She had no way of knowing then that the sewing machine would be the means by which I would make a living, or that the typewriter would eventually make it possible for me to learn to use the computer–and possible for me to be on-line, sharing with others the things that I have learned about God.  What may have been a few loose threads in her life have, in my life, proven to be the very things that God has chosen to use over and over again, in the weaving of the tapestry which has become my life.

To be sure, those loose threads are just further evidence that…

“Oh, the depth of the riches both of the wisdom and knowledge of God! How unsearchable [are] His judgments and His ways past finding out!” (Romans 11:33 NKJV)