Detour Around Trees | His Truth, My Voice

Although I had planned on using our time together today to try and answer some of the questions that were raised at the end our last visit—questions as to why God would choose to use trees to tell His story of redemption—it doesn’t look like that is going to happen.  The reason is, every time I have tried to organize my thoughts on the subject, it was as if somebody put my brain on “automatic scramble;” and, after being hit with the equivalent of a mental brickbat, not just once but many times, I decided that it would be to my advantage to go with whatever alternative the Lord decided to give me.  This seems to be that alternative—a reflection that I am calling “A Detour Around the Trees”—for all of the obvious reasons.

This detour originally began as a status update for my Facebook page, however, it never made it that far.  For whatever reason, while I was working on this, I didn’t experience the “brain scramble” that I did with the other work. As a result, this update just kept on growing until eventually it looked more like a reflection rather than an update–so that is what I decided to make it.

It was always my intention, once this blog was up and running, to use one of our visits to explain why I had chosen “His Truth, My Voice:  The Reflections of a Reluctant Prophet” as the name for my blog.  But, even though we have been meeting together, on average, once a week for the past five months, it is something that remained unattended to.  I thought that since some of you may have been curious about my choice of names, this would be a good time to offer an explanation for it—plus, it will give my brain something of a break, too.  So, let’s get started by first explaining the “reluctant prophet” part of the name.

This originated many years ago, when I was trying to get a new singles’ Sunday school class started at my church; a class specifically designed for more in-depth Bible study than what was currently being offered.  When I proposed the class to the powers-that-were, though, I was told by the minister of education that I would not be allowed to teach the class because I was a woman who would be teaching adult men.   He explained to me that there were only two other women in the church at the time who were teaching adult men, but it was okay for them because they were married and their husbands were “visible presences” in the church.   When I replied that, as a single woman, I considered Christ to be my husband until He gave me one in the flesh, and that I certainly hoped He was a visible presence in the church, the minister didn’t know quite how to respond—other than to say that he still didn’t want me to teach. 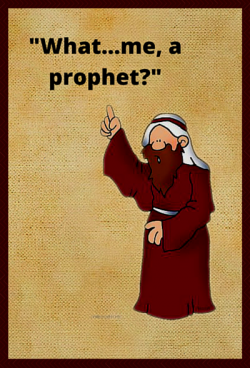 I Don’t Think So…

Interestingly enough, about this same time, I was asked to be the guest teacher in a men’s Sunday school class at another church about a hundred miles away. Obviously, this church didn’t have the same concerns about me teaching men that my home church did.  Naturally, none of this made any sense to me, so while I was out walking one day, asking the Lord what I should do about both situations, He spoke to me, saying, “You need to resolve this issue because I am going to make you a prophet…”

Since that was the last thing I expected to hear, you shouldn’t be surprised to learn that the first thing out of my mouth was, “But I don’t want to be a prophet, I want everyone to like me.  Besides, I have read ‘The Book’ and I know what the ‘people of God’ have done to the prophets of God in the past–plus, I am really not up for being drawn and quartered, burned at the stake, beheaded, or boiled in hot oil.  So, what is ‘Plan B’?”  Although I waited and waited for Him to respond, no answer came.

More time went by and when no “Plan B” was forthcoming, I decided to go back to God in an effort to try and negotiate a better deal for myself.  “Okay, I get it—there is no ‘Plan B’.  But, if You are really determined to go ahead with this ‘Plan A’ thing, at least let’s define our terms; that way I will know exactly what You will be expecting of me as your ‘prophet.’  According to my definition of the term, however, I just don’t see how I could possibly be qualified to be one.  I don’t foretell the future, I don’t give personal words to people, and there isn’t a preacher that I know of who would move over and let me preach the Word from his pulpit.  So, what do You mean when you use the term ‘prophet’?”

After a short pause, all I heard Him say was, “Think about it.” (Mind you, He has told me that on more than one occasion and I really don’t like to hear it because, as far as I am concerned,  it requires just a little too much effort and thought on my part, if you know what I mean.)

Hmmm…think about it, huh?  Well, the thought that came to my mind right away was of the three offices that were mentioned in the Old Testament:  those of prophet, priest, and king.  And, as I began to think about them, I realized immediately that I could eliminate any consideration of the duties of king because gender alone would exclude me from that office.  As for the office of priest, I was aware that it was to be filled by someone who would represent the people before God; someone who would bring sacrifices, prayers, and petitions before Him on their behalf.  Of course, being a Christian meant that I was already a member of the priesthood of believers, so I couldn’t see how I would have to concern myself with that office either. 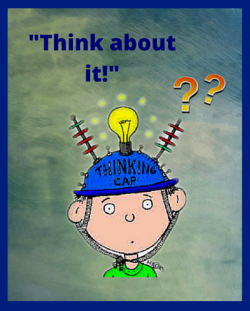 With this process of elimination speeding things along, all that was left for me to consider was the office of the prophet.  I knew that this office was going to be different from the others because both of those were intended to be hereditary ones.  The office of prophet, however, was to be occupied on an as-needed basis by the person chosen by God to be His representative before the people; as such, he would be charged with the task of delivering God’s Words to the people,  so that they could come to understand His thoughts, positions, or attitudes concerning any given subject or situation.

As I thought about all of this, suddenly the bells went off—ding, ding, ding—and the light bulb came on—blinkie, blinkie, and I said, “OK, Lord, I’ve got it.  As Your prophet, what You want me to do is to take Your Word to people, and use it to explain to them who You are, and what You want from and for them.  I can do that—in fact, I have been doing that for years!  No problem.”

Thankfully, I did not have to work so hard or think quite so much when it came to the reason for the “His Truth, My Voice” part.  That’s because those words came to me directly from the Lord, in two messages given on two separate occasions.  In a word given to me by the Lord on June 26, 2008, He said,

“Remember:  My Word is My Truth, and My Truth is Your Voice.”

His instructions couldn’t have been any clearer so, for once, He didn’t get any back-talk from me—something which certainly must have come as a welcome change!