During the course of our first three visits together, you have met and learned a little about me, you have been introduced, very briefly, to the greatest mentor that anyone could have—my mother, and you have learned how I, the least likely of all people, have found my way onto the web.  Now, with all of these social amenities out of the way, I think it’s time for us to get down to the really important stuff, which is the reason that I am here on the web in the first place.  To put it plainly, I am here to talk to you about “THE MEANING OF LIFE”.  (Since I haven’t gotten to the “installation of sound effects” lesson in my Blogular studies yet, but because of the need to emphasize the significance of that phrase, we will have to provide our own effects–so try to imagine that phrase being propelled into the atmosphere by the deepest, most resonant of male voices, and that, as the words are rolling off the tip of his tongue, the last word, “life,” is reverberating out into the cosmos for what seems like eons—like Wowwowwowwowwowwow…!) 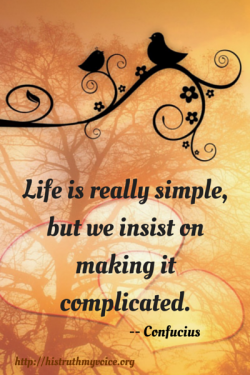 Now, with that echo fading, let me ask you a most important question—have you figured out yet what life is all about?  This question is such a significant one that people throughout the ages have tried just about everything in order to find an answer for it.  In their pursuit of a reason for being, they have studied the stars, scaled the earth’s highest mountains, and often risked life and limb in the exploration of strange and distant lands.  Many have looked for the answer through the accumulation of wealth or political power, while still others searched for it in such hedonistic practices as gluttony, drunkenness, drugs, or sex.  Many thought that they would find it through their devotion to all sorts of religious rituals, or as a result of their charitable works.  And, there have even been some who thought the answer would come to them through the abuse or denial of their bodies, as they lived in caves and deserts, slept on beds of nails, or walked on coals of fire.

It is too bad that they didn’t know that life’s meaning could never be found in such things—that is, in the works of men.  You see, the meaning of life can only be found in the person who is the embodiment of life itself, and that person is Jesus.  In fact, if we review the big picture of life on this planet, we will find that it has been and will always be about Jesus.  Consider that:

Many years ago, my husband surprised me when, one day out of the blue, he told me that I had a very unique gift.  When I asked what it was, he said that I had the ability to take complex things and make them simple.  Although I hadn’t been of aware of doing it before, once he brought it to my attention, I could see that throughout my life, I had made a practice of reducing all of life’s big issues down to their simplest forms so that I could understand them better.  In fact, without even being aware of doing it, I had reduced all of the deep theological doctrines of the Christian faith down to three simple principles, just so I could get a handle on this whole “MEANING OF LIFE” thing.  Basically, I had come to the conclusion that:

That makes life really simple, doesn’t it?  That makes it all about what it has always been about, which is—Bam!  You guessed it, it is all about Jesus!   Now that’s a real…Wowwowwowwowwowwow…! 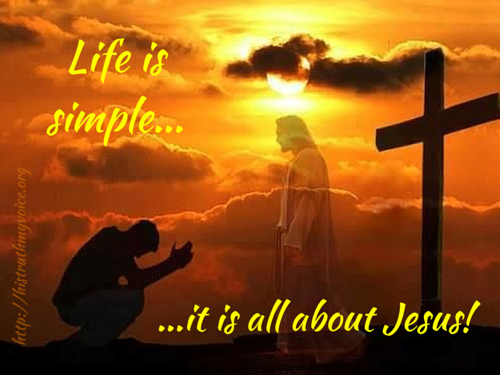 Take a few minutes to reflect along with Mark Schultz upon Jesus as the “I Am.”