When our last meeting ended, we were left waiting—imagine a drum roll here—poised for the drama of the ages which was about to unfold before us.   Today, as we come together again, this is how we find the stage set for us:  the first man and woman have been created, they are living in a garden paradise which has been prepared especially for them; they are living in an idyllic state of innocence; plus, they have been entrusted with a specific word of instruction from God, concerning the tree that was growing in the center of their garden. 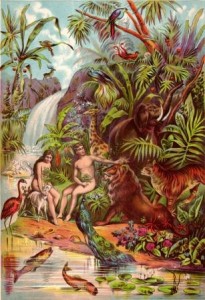 Adam and Eve in the Garden

As we learned last time, man had been created for the express purpose of becoming a “Son” or a child of God; however, we also learned that before that could ever happen, he would have to be found righteous, or to be in right standing with God—in other words, he would have to be holy, just like God, His Father.  (As the old saying goes, “like Father, like son,” so, we can hardly expect a holy God to go around fathering a family of “unholy” children, now can we?)

Of course, this would mean that before the innocent man could be found righteous in the eyes of God he would have to be tested and then maintain his innocence in the face of that testing, thereby demonstrating that he could be trusted with the awesome responsibilities of “Sonship,” which is nothing other than the carrying out the will of God on the earth.  And, if he could prove that he trusted the Word of God enough to obey it, then that Word would be all that he would need to overcome any temptation presented to him by the flesh, the world, and the devil.

Let’s take a moment to consider the real situation here.  For the first man and woman, there were no parents, grandparents, in-laws, children, bosses, or co-workers; no government authorities, bureaucracies, taxes, traffic jams, or irritating friends or nosy neighbors to deal with, or to blame.  They were living in ideal circumstances—in perfect health, in the perfect home, in the perfect neighborhood, working at the perfect job—and they were wanting for nothing.  They were even living in the very presence of God, meeting and conversing with Him daily—Wow, what a treat that must have been!  Every physical, emotional, and spiritual need was being met.  There was nothing, absolutely nothing, hindering their relationship with God and with one another, until…and this is where the lights go up, the orchestra commences with it melodic strains, our characters appear on stage, and today’s action begins… 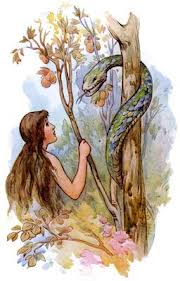 Face to Face with Temptor

Now the serpent was more crafty than any other beast of the field that the Lord God had made.   He said to the woman, “Did God actually say, ‘You shall not eat of any tree in the garden?'”

But the serpent said to the woman, “You will not surely die.  For God knows that when you eat of it your eyes will be opened, and you will be like God, knowing good and evil.”

Then the eyes of both were opened, and they knew that they were naked.  And they sewed fig leaves together and made themselves loincloths.  Genesis 3: 1-7 (ESV)

At this point, our director yells, “Cut!,” and all action ceases for the moment so that we can analyze what has just happened in these few but epic moments in human history.  In case you missed it:

What a cosmic catastrophe!  It is absolutely mind-boggling to think that the actions of just two people, living on such a small piece of real estate in some unidentified area of the world, could alter so radically not only their destinies but the destinies of every single person who would ever live, as well as the very planet that they and their future generations would call home.  And yet, that is exactly what happened; and all because two people who had everything doubted God’s Word, questioned God’s goodness, exchanged the truth of God for a lie, and believed—and tried unsuccessfully—to become God through their own works.  Have you ever wondered if, given the same set of circumstances, you would have done anything differently?   Have you ever thought about how different things would be today if only they had obeyed the Word of God—or, considered how different things might be for each of us if only we would obey the God’s Word?

“Word of God Speak” by Kutless