The Capstone of God's Creation | His Truth, My Voice

As we wait for the curtains to re-open for Vignette #2, here at Stage #1 of God’s One Big Story, let’s take a moment to recall where we were in the Story when these very same curtains were closed so abruptly on Vignette #1—The Creation of the World.  At the time, we had just witnessed the most astounding display of power, wisdom, order, and creativity ever, as God in three Persons created, out of nothing, the cosmos and everything in it—everything, that is, except the human life which had been His ultimate objective from eternity past.  It was at this pivotal moment, when everything else in God’s created order was in place, that a light shone on the Stage and God, in His Tri-unity, announced plans for the imminent creation of a Capstone—that is, a crowning achievement, point, element, or event, for all of His work, by saying…

…Let us make man in our image, after our likeness.  And let them have dominion over the fish of the sea and over the birds of the heavens and over the livestock and over all the earth and over every creeping thing that creeps on the earth.
(Gen. 1:26)

It was with this pronouncement that the curtains closed temporarily on the Creation Story; leaving us somewhat bewildered and confused as to why the Story would come to a screeching halt right at this particular point.  The reason for this seemingly inconvenient and unnecessary delay will become clearer to us, though, if we think back to Here at Last, at Stage #1…, where we were, for the sake of improving our scriptural navigation skills, introduced to the concept of Surfing our way through Genesis.  As we learned then, Surfing through Scripture is very much like going to a website and then clicking on one link after another, until we finally get to the information we are looking for—which, in this instance, means going to Genesis 1, and looking for the most important piece of information contained there.  This information, in verse form, will then provide us with the link needed to connect us with the action that will be taking place in next chapter.   In Chapter 1, this connecting link is found in verse 27, the Creation of Man—the very place where the curtains closed on us before.

You see, quite often when people are reading through Genesis 1 and 2, they make the mistake of thinking that there are two separate Creation Stories being recounted when, in fact, the Story that is being presented in Chapter 1 is an overview, a big picture, or a master shot of this one particular scene—while that which is taking place in Chapter 2 is the close-up of the very same scene. This is exactly where we find ourselves now, as Vignette #2 begins—we are flashing forward to view the close-up of the Creation of Man, the Capstone on all of God’s Creation!

So, with the lights in the theatre dimmed again, and with the curtains parting once more, here is the paradisaical setting that we find on the Stage before us… 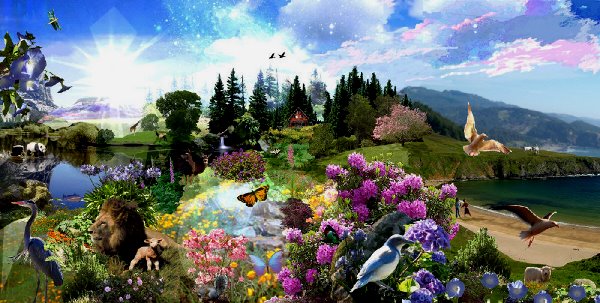 The Paradise of the Early Earth

The pristine beauty of this scene serves up a such a visual feast that it is almost too much for our eyes to fully savor; and yet, almost immediately after the curtains part, our other senses are pushed to the brink of overload as the sound of a heavenly choir, somewhere off-stage, begins singing praises to God for bringing all of this splendor into existence.  Suddenly, we are so overcome by all of the majestic sights and sounds we are experiencing, that we find ourselves singing along with them…

[For] The heavens declare the glory of God, and the sky above proclaims his handiwork.
Day to day pours out speech, and night to night reveals knowledge.
There is no speech, nor are there words, whose voice is not heard.
Their voice goes out through all the earth, and their words to the end of the world.
(Psalm 19: 1-4)

[For] Worthy are you, our Lord and God, to receive glory and honor and power, for you created all things, and by your will they existed and were created.
(Revelation 4:11)

Enraptured as we all are in the wonder and worship of the moment, not one of us is giving a single thought to what things looked like just six days prior to this; and yet, it is to very these things that the off-stage Narrator now redirects us, as he summarizes the events leading up to this all-important moment…

These are the generations of the heavens and the earth when they were created, in the day that the Lord God made the earth and the heavens…[in that day] when no bush of the field was yet in the land and no small plant of the field had yet sprung up—for the Lord God had not caused it to rain on the land, and there was no man to work the ground, and a mist was going up from the land and was watering the whole face of the ground …(Gen. 2:4-6)

As soon as these words are spoken, the bright light we had seen previously in Vignette #1 reappears, and begins shining again on the same insignificant looking piece of ground that it had illuminated before.  With our attention now riveted on this spot, we hear the Narrator describe that action that is taking place on the Stage, when he says…

Then the Lord God formed the man of dust from the ground and breathed into his nostrils the breath of life, and the man became a living creature [soul].  And the Lord God planted a garden in Eden, in the east, and there he put the man whom he had formed.  And out of the ground the Lord God made to spring up every tree that is pleasant to the sight and good for food.  The tree of life was in the midst of the garden, and the tree of the knowledge of good and evil.  (Gen. 2:7-9)

Our Narrator pauses for a moment in an effort to give us with a little more information about the richness and expansiveness of this Garden, by telling us that…

…before returning to the action of the Story, where we learn that…

The Lord God took the man and put him in the Garden of Eden to work it and keep it.  And the Lord God commanded the man, saying, “You may surely eat of every tree of the garden, but of the tree of the knowledge of good and evil you shall not eat, for in the day that you eat of it you shall surely die.”  (Gen. 2:15-17) 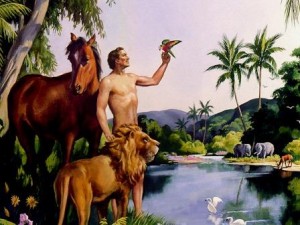 Now out of the ground the Lord God had formed every beast of the field and every bird of the heavens and brought them to the man to see what he would call them.  And whatever the man called every living creature, that was its name.  The man gave names to all livestock and to the birds of the heavens and to every beast of the field.  But for Adam there was not found a helper fit for him (Gen. 2:19-20).

So the Lord God caused a deep sleep to fall upon the man, and while he slept took one of his ribs and closed up its place with flesh.  And the rib that the Lord God had taken from the man he made into a woman and brought her to the man.  Then the man said, “This at last is bone of my bones and flesh of my flesh; she shall be called woman because she was taken out of Man.”  Therefore a man shall leave his father and mother and hold fast to his wife, and they shall become one flesh.  And the man and the woman were both naked and were not ashamed (Gen.2:21-25).

With this, we now flash back to what we heard from behind the curtain at the end of Vignette #1, as our Narrator then announced… 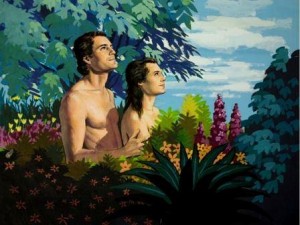 “It is not good that man should be alone…”

So God created man in his own image, in the image of God he created him; male and female he created them.  And God blessed them.  And God said to them, “Be fruitful and multiply and fill the earth and subdue it and have dominion over the fish of the sea and over the birds of the heavens and over every living thing that moves on the earth…Behold, I have given you every plant yielding seed that is on the face of all the earth, and every tree with seed in its fruit.  You shall have them for food.  And to every beast of the earth and to every bird of the heavens and to everything that creeps on the earth, everything that has the breath of life, I have given every green plant for food.  (Gen. 1:27-30)

Satisfied that this, the Capstone of His Creation, is not just good but very good, God brings His work on this sixth day of Creation to an end.  With the heavens and the earth thus completed…

As the curtain closes on Vignette #2, we are once again treated to the sound of the heavenly choir as it praises God…

O Lord, our Lord, how majestic is you name in all the earth!  You have set your glory above the heavens…
When I look at your heavens, the work of your fingers, the moon and the star, which you have set in place, what is man that you are mindful of him, and the son of man that you care for him?
Yet you have made him little lower than the heavenly beings and crowned him with glory and honor.
You have given him dominion over the works of your hands; you have put all things under his feet, all sheep and oxen, and also the beasts of the field, the birds of the heavens, and the fish of the sea, whatever passes along the paths of the seas.
O Lord, our Lord, how majestic is your name in all the earth!
(Psalm 8)

And to this, all that we can add is…Amen!