Fruit Doesn't Fall Far from the Tree | His Truth, My Voice

Now that we have learned a little something about the principles of Sowing, Reaping, and the Nature of the Two Trees that were planted in the center of the Garden of Eden, it is time for us to take a look at the part these elements played in the Cain and Abel story which was recently acted out for us in Vignette #4.  Keeping in mind the principles that we have learned since then—which were, that for any seed sown…

…it should be easy for us to see how the seed sown by Adam and Eve, when they ate the fruit from the Tree of the Knowledge of Good and Evil, reproduced itself in the lives of their children and grandchildren; bringing forth a harvest more bitter and deadly than anything they could ever have imagined.

Although we aren’t told a lot about Cain and Abel, either in Genesis 4 or in the few related passages that speak of them, we are told enough to know that these two brothers were as different as different could be—with the first difference being seen in the way in which they came into the world.  Although they weren’t born into the same paradisaical situation that their parents had first experienced, still, the world which greeted them both must have a very beautiful one.  Cain was born into it first and, because of this, his birth elicited a far more ecstatic reaction on the part of their mother. 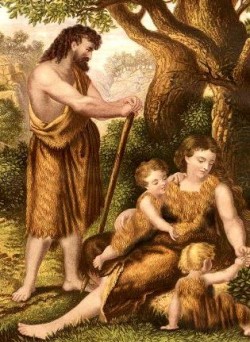 Adam and Eve with Sons

As you may recall, back in Genesis 3:15, when God provided animal skins as a covering for Adam and Eve’s sin, He promised that one day the “seed of the woman” would come and crush the head of the Serpent—an act of redemption and deliverance which would free Man forever from his bondage to sin and death.  We can well imagine that from Eve’s joy when a male child was born to her, and from the naming of him as Cain (meaning “gotten,” as in “I have gotten a man from the Lord”), both she and Adam looked upon this child as the “Promised One”—or, as the One who would someday deliver them from the curse brought about by their sin.

Abel’s birth, on the other hand, didn’t create quite the same stir.  There was no obvious excitement when he was born and, in giving him a name meaning “vapor, vanity, or breath,” it would seem that not too much was expected of him by his parents—that, maybe, in their eyes, he would never be able to measure up to stature of his older brother.

But, with both boys being raised in a generally pleasant environment by the same parents and, with them living in a world…

…it would be reasonable to expect that both of these young men would turn out to be equally fine specimens of humanity, wouldn’t it?

The second noticeable difference between Cain and Abel was readily seen in their choice of vocations, with Cain, either willingly or out of necessity, choosing to become a farmer, and with Abel choosing the life of a shepherd. These were two completely different but equally demanding occupations, with the former requiring hard work to produce food from ground previously cursed by God; and, the latter demanding a twenty-four hour a day commitment to the raising of the animals which could be used for both sacrifices and clothing.  Although different, it would seem that these two livelihoods would prove to be mutually beneficial:  Cain could exchange some of his produce for the sheep he needed for sacrifice and for clothing, while Abel could use the produce he received to provide food for himself and his family.

Of course, the major difference between these two brothers was in their opposing attitudes toward and relationships with God.  For, although both boys had been born into the same family, and were of the same spiritual stock—that is, in their original spiritual states, they were both products of the Tree of the Knowledge of Good and Evil; Cain, at the time of our story, was still proving himself to be fruit from that Tree of rebellion, while Abel, through his actions, was demonstrating that he had found his way to the spiritual Tree of Life, and had become part of its fruit.  For evidence of this, we need to look no further than at the offerings these young men brought to God.

We first learn of these offerings in Genesis 4:3-4a, where we are told that… 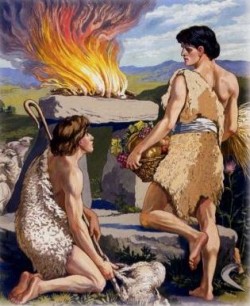 Cain and Abel at the Altar

In the course of time Cain brought to the Lord an offering of the fruit of the ground, and Abel also brought of the firstborn of his flock and of their fat portions.

At first glance, nothing seems to be amiss in this situation; Cain, from all outward appearances, is bringing God some of the fruits of his labor, while Abel is doing the same.  But, then, things take a decidedly different turn as we read in verses 4b and 5 that…

Hmmm…here we have two brothers with two offerings, both being made at the altar and both at the appointed or designated time for sacrifice—what could possibly have been wrong with this picture?  What was it that set these offerings apart, making one but not the other acceptable to God?  Was it because of the differences in the offerings themselves, or was it something that went deeper than that?

I have heard a considerable bit of discussion about this over the years, with some people advancing the theory that, because there was no specific written instruction as to what the offering should be, the one which Cain brought should have been okay; with those holding to this opinion frequently citing the provision of grain offerings in the Mosaic Law to support their position.  However, the grain offerings included in the Law were Peace and Thanksgiving offerings that were to be made once a sin or a burnt offering (offerings specifically calling for animal sacrifices) had been made and accepted by God.  While we have no indication that any type of grain offering had been sanctioned by God or instituted as part of the worship ritual in Cain and Abel’s day, we can find scriptural justification to support the belief that the animal sacrifice brought by Abel was the type that had been mandated by God.

In Leviticus 17:14, it says that “…the life of every creature is its blood:  its blood is its life;” and, in Romans 6:23 that “…the wages of sin is death, but the free gift of God is eternal life in Christ Jesus our Lord.”  Since, in these passages, God declared that the life of a person is in his or her blood, and that the wages of his or her sin is death, then it would follow that the person who sinned would be required to die and offer up his or her life’s blood to atone for that sin.  Although this was, and still is, the demand of God’s holy law, God has added something of a proviso to it; and that is, as an act of His grace, God stipulated that another’s life—and blood—could be substituted for that of the sinner, on condition that the life and blood of the substitute be sinless, so that it could satisfy the righteous demands of the law.  This law of substitution is what made the sacrifice of innocent animals necessary, and is why this type of offering became the precedent for all those that would be made in the future.

With this precedent having been established in the Garden, and with parents who no doubt told their sons all about it, why would Cain have dared to bring any other kind of offering to God?  Although we are not told so here, fallen human nature being what it is, there are some things that we can surmise which might help to explain his actions:

Whatever else may have been going on behind the scenes, one thing we can know for sure is that the real issue between these two men was neither physical nor emotional but spiritual in nature, and reflective of the two very different heart attitudes of the brothers.  For proof of this, we need only to go to  Hebrews 11:4, where we learn that the truly distinguishing feature between their two offerings was faith, for…

“By faith, Abel offered up a more acceptable sacrifice than Cain, through which he was commended as righteous, God commending him by accepting his gifts.”

And why was faith the deciding factor here?  As it is explained so simply in Hebrews 11:6 and in 1 Samuel 16:7, respectively…

“…without faith it is impossible to please him [God], for however would draw near to God must believe that he exists and that he rewards those who seek him.”

If a heart of faith was what was required to please God, then how did Abel’s offering reveal that?  Since “…faith comes by hearing and hearing by the Word of God (Rom. 10:17),” Abel must have taken to heart the Word that he had received, most likely from his parents, which said something to the effect that “…without the shedding of blood, there is no remission of sins (Heb. 9:22)”—and then acting upon that Word, he offered up to God his best lamb as the substitutionary payment for his sins. 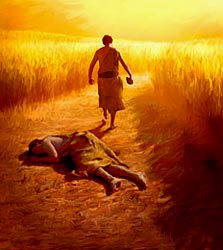 Cain, on the other hand, in his rejection of the same Word, and in his willful determination to do things in his own way, foolishly attempted to come to God on his own terms, rather than approaching God in the manner which had previously been ordained.  Such arrogant actions on Cain’s part resulted in God’s rejection of his offering, which provoked Cain to anger and to the subsequent murder of his brother, which led to a further curse being placed on his farming, and which, when he refused to repent, led to Cain’s separation from the presence of God, leading ultimately to a life of fearful wandering.  As for the true nature of Cain’s heart and actions, they were best described centuries later by the Apostle John, when he warned his readers in 1 John 3:12:  ““We should not be like Cain, who was of the evil one and murdered his brother.  And why did he murder him?  Because his own deeds were evil and his brother’s righteous.”

Now, as we recall what we previously learned about the nature of the two trees—which was…

…then it should be plain enough for us to see that Cain, in his prideful reliance upon his own works at achieving righteousness, was the first and most perfect piece of fruit to fall from the Tree of the Knowledge of Good and Evil—becoming, if you will, a regular “poster child” for all those who would come after him, seeking to come to God on their own merits.  Abel, on the other hand, with the placement of his faith in the gracious provision of God—that is, in the one allowing for the substitutionary death of an innocent lamb to provide a covering for his sins—was the first and a most fitting example of the fruit to be produced by the Tree of Life.  The offerings that they brought to God, then, were merely outward demonstrations of these inner beliefs.

Of course, both of these trees will continue to bear fruit in each of the generations to come but our inspection of that fruit will have to wait until next time; the time when we will also complete our assessment of the story of Cain and Abel by looking for…

Until then, though, let’s join with Kutless and reflect on just…“What Faith Can Do.”