…to Take Down the Kingdom of Darkness

In our last exercise, Spiritual Warfare: A Question of Authority, we were introduced to the concept of Dominion; and, as part of that introduction, we learned that our Destiny, as God’s Children, is to one-day rule alongside of Christ in His Coming Kingdom.  In anticipation of and preparation for that Destiny, God gifted the first Man and Woman with the Authority that they (and we) would need to rule over His Earthly Creation.

Unfortunately, this Authority was lost—handed over to Satan—when Adam and Eve succumbed to his temptation to disobey God in order to become “gods” on their own terms—that is, apart from God and through their own wisdom and works.  Of course, it didn’t take long for them to realize what a foolish decision that was; for, not only did they immediately lose their (and our) Authority to rule, but both they and we became slaves to Satan, sin, and death in the process.

Thankfully, God already had a plan in place—a plan in which His Son, Jesus, would come to the Earth as a Man, live and die as a Man; and then, through His sacrificial and atoning death on the Cross, He would recover Man’s lost estate—which included the forfeited Right to Rule over the Earth.  It was this Authority that Jesus, upon the successful completion of His mission, restored to His Disciples, and to all who would later come to Faith in God through Him. 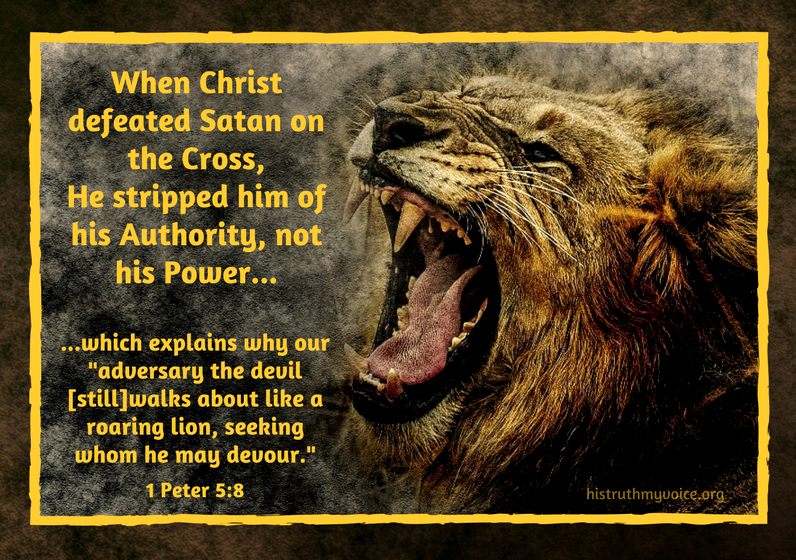 If We’ve Already Won, Why Fight?

When we say that Jesus, through His Victorious Death and Resurrection, won back our lost Authority, we do not mean to imply that He divested Satan of any of his power.  That’s because, in spite of the often-interchangeable use of these words, Authority and Power are two different things.  As Dutch Sheets explains…

…authority and power are not the same.  Power is the ‘strength or force’ needed to rule; authority is the ‘right’ to do so.  They are governmental twins and must operate in tandem; authority without the power to enforce it is meaningless; power exercised without authority—the right to use that power—is usurpation and is morally wrong.

Satan didn’t gain any power at the fall and didn’t lose any at the cross.  His power or ability didn’t change at either event; his authority, or the right to use that power, did.  In fact, though Christians often state otherwise, Scripture nowhere says that Christ delivered us from or dealt with Satan’s power at Calvary.  He dealt with Satan’s authority.[1]

Be sober-minded; be watchful. Your adversary the devil prowls around like a roaring lion, seeking someone to devour (1 Peter 5:8).

It is also an important distinction to be made because…

If on the other hand, Jesus dealt with Satan’s authority—the right to use his power or abilities—then we would need to deal with him as a usurper, a rebel, a thief that has no right to steal, kill, and destroy but will if not stopped (see John 10:10).  If we have been delivered from Satan’s authority and given a higher authority in Christ’s name, then we must exercise that authority over the devil’s works and power.  When we do, God’s awesome power will back up our authority.[2]

Since we know that Jesus has dealt with Satan’s authority, and we have been delivered from his authority and given a higher one in Christ’s name, we must use what we have been given to stop the works of the Satanic Usurper so that the Kingdom of Heaven can come to the Earth—just as God has always intended it to do.

For although Satan knows what Christ did to him at Calvary and through the Resurrection, and realizes that as a part of Christ the believer is his master, he still carries on a guerrilla warfare against the Church through the use of subterfuge, deception, and bluff.  While guerrilla warfare is illegal, it is still warfare and must be faced and overcome.  God could put Satan completely away, but He has chosen to use him to give the Church ‘on-the-job’ training in overcoming.  Otherwise, there would be no more warfare of any kind.

We are in apprenticeship for our place with Christ on the throne following the Marriage Supper of the Lamb.  The crown belongs to the conqueror—and without an adversary there could be no practice in overcoming.[3] 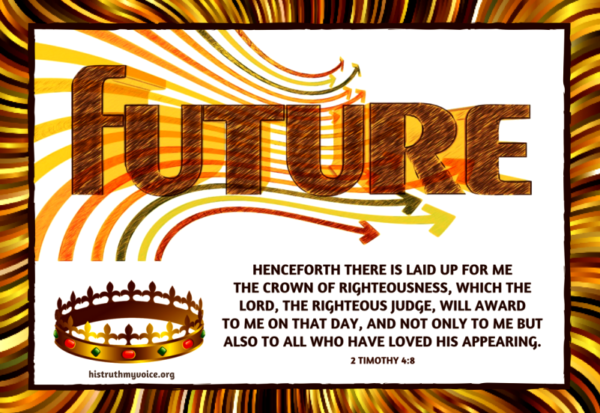 Is There a Crown in Your Future?

An Apprenticeship in Overcoming

By definition, to overcome means to…

I don’t know about you but the thought of all this effort holds little to no appeal for me; as someone with a serious aversion to confrontation and conflict, it sounds like a lot more hostility and hardship than I want to sign up for.  Given my “druthers,” my flesh—that is, my body and soul—would prefer to coast along through life with as few physical challenges and emotional hassles as possible.  However, this just isn’t going to happen, is it?  As most of us can already attest to, life seems to be one series of obstacles after another; between which, if we are fortunate, we find brief periods of rest and relief.  So, in light of this, what should our attitude toward these obstacles be?

The Apostle Paul answers that question for us in Philippians 2:5, when he challenges us to…

Let this mind be in you, which was also in Christ Jesus…

…a challenge which then begs the question, what kind of mind did Jesus have?  Having reviewed some of the humiliation, rejection, opposition, and affliction that Jesus encountered on His way to the Cross in our last exercise, and considering how He triumphed over every obstacle that stood between Him and the completion of His mission—a mission which ultimately ended with His victory over death itself—I think we can safely say that the mind of Christ was one of an Overcomer.

I bet you didn’t realize it at the time but, when you trusted Christ as your Savior, you also became an overcomer, just like Him.  That’s because, before you could even come to faith in Him, you had to overcome three really big obstacles–the things that the Bible refers to as “the world, the flesh, and the devil.”   This means that on your way to the Cross, you had to overcome the downward pull of the world and its culture, the inward pull of your sinful human nature, plus all of the obstacles that were placed in your path by the devil solely for the purpose of keeping you away from Jesus.  And, since all of this was being accomplished over the course of time, you probably had no idea at all that this was what you were actually doing. 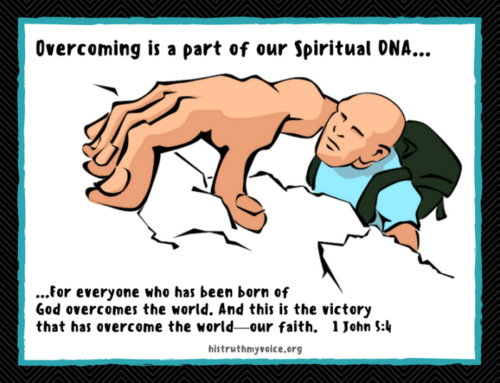 We Can Do All Things Through Christ

The truth is, that as distasteful as the thought of overcoming may be to our flesh, once we are Born Again through Christ, it becomes a part of our spiritual makeup—or, as these verses attest to, a part of our Spiritual DNA…

I have said these things to you, that in me you may have peace. In the world you will have tribulation. But take heart; I have overcome the world. John 16:33

For everyone who has been born of God overcomes the world. And this is the victory that has overcome the world—our faith (1 John 5:4).

Little children, you are from God and have overcome them [opposing spirits], for he who is in you is greater than he who is in the world (1 John 4:4).

Do not be overcome by evil, but overcome evil with good (Romans 12:21).

To him who overcomes I will grant to sit with Me on My throne, as I also overcame and sat down with My Father on His throne (Revelation 3:21).

Overcoming, then, is the process by which we, as the Church, learn to take authority over the obstacles and the enemies that are trying to keep God’s Will and Kingdom from coming to the Earth.  It is imperative that we become adept at this because, as the Bride of God’s Son, we will one-day be ruling with Him over this very same Kingdom.  As the Apostle Paul explains it…

…do you not know that the saints will judge the world? And if the world is to be judged by you, are you incompetent to try trivial cases?  Do you not know that we are to judge angels? How much more, then, matters pertaining to this life! (1 Corinthians 6:2-3)

Therefore, in preparation for her glorious Destiny, the Church—the Bride of Christ…

…must learn the art of spiritual warfare, of overcoming evil forces in preparation for her assumption of the throne following the Marriage Supper of the Lamb.  To enable her to learn the technique of overcoming, God devised the scheme of prayer.  To give her ‘on-the-job’ training, God delegated to her the authority to enforce His will right here on earth.  In order to enable her to acquire the character and the ‘know how’ she will need as co-sovereign, He has placed upon her the responsibility and authority to enforce God’s will and administer His decisions in the affairs of earth.[5]

We’re in the Army Now! 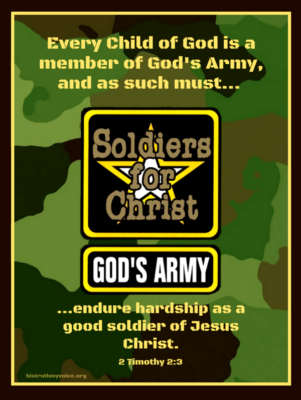 Our Faithful Service for Christ will bring us Eternal Rewards

Although they may be unaware of it at the time, when New Believers come to Christ for Salvation, in addition to being Born Again spiritually and adopted into the Family of God, they are also automatically inducted into the Armed Forces of God.  Make no mistake about it, this is not a Volunteer Army; for, everyone who is raised to New Life in Christ is immediately conscripted into it as one of His Soldiers.

Unfortunately, some of these Believers, due to a lack of adequate Discipleship Training, remain woefully ignorant of the Spiritual War raging around them and of their responsibility to do battle in it—so they never even report for Service.  Some others, when they are made aware of the conflict, acknowledge the reality of the situation but then refuse to become involved; leaving others to do the fighting for them, while they assume the stance of Conscientious Objectors.  And, still others, when informed of the War and their status as Soldiers in it, flatly refuse to believe that it is real and go AWOL, choosing to live out their lives in a perpetual state of Spiritual Denial.

But, let’s not be counted among these!  Not only does their absence on the Spiritual Battlefield hurt the cause of Christ and hinder the coming of His Kingdom, but it also robs them of the rewards they may have otherwise received in that Kingdom.

Instead, let’s keep in mind that…

…we must all appear before the judgment seat of Christ, so that each one may receive what is due for what he has done in the body, whether good or evil (2 Corinthians 5:10); and,

…whatever you do, work heartily, as for the Lord and not for men, knowing that from the Lord you will receive the inheritance as your reward (Colossians 3:23-24).

…press on toward the goal for the prize of the upward call of God in Christ Jesus (Philippians 3:14); being…

…fully convinced that God was able to do what he had promised (Romans 4:21).

In our next exercise, we will be taking a look into the Nature of the Conflict…