If I had to choose my favorite book in the New Testament, it would be tough to have to choose between the books of Romans and Ephesians but, in the end, I think I would have to go with Ephesians.  That’s because, in its six short chapters, Paul lays out for us God’s grand plan for all humanity and, in case you haven’t picked up on this yet, I am all about understanding His “grand plan.” In fact, I am so eager and determined to learn as much as I can about it that I have become very much like the little kid who tags along after her father, nagging him for answers to questions that would drive most dads to distraction; questions which, in the case of my heavenly Father, would sound something like this:  “Papa, Papa, why did you make the world?  Papa, Papa, why did you make people?  Papa, Papa, why are some people mean while others are nice?  Papa, Papa, why do people have to die? and most importantly, Papa, Papa, why did Jesus have to die?”  Although I am getting up there in years now, I am pleased to be able to say that my faith is still of the childlike variety, meaning that when I ask questions, I need answers that are simple, straightforward, and understandable—and that’s just what I get in the book of Ephesians.

Although it is filled with some of Paul’s best run-on and seemingly complicated sentences, when you get right down to it, Ephesians isn’t all that difficult to understand:  in its first three chapters, we are told what God has done in the heavenly realms to make us His children, and then, in the last three chapters, we are told how we, as God’s children, are supposed to behave.  Pretty simple and straightforward, huh?  My favorite passage is Ephesians 1:3-14 and, although it’s a passage that we have looked at before, it is such an important one that I think we need to go over it again a little more thoroughly. For, if I was asking my Heavenly Papa about the who, what, where, how, when, and why of life, I have every confidence that He would direct me to this passage and say, “I’m glad you asked child, it’s all right here…” 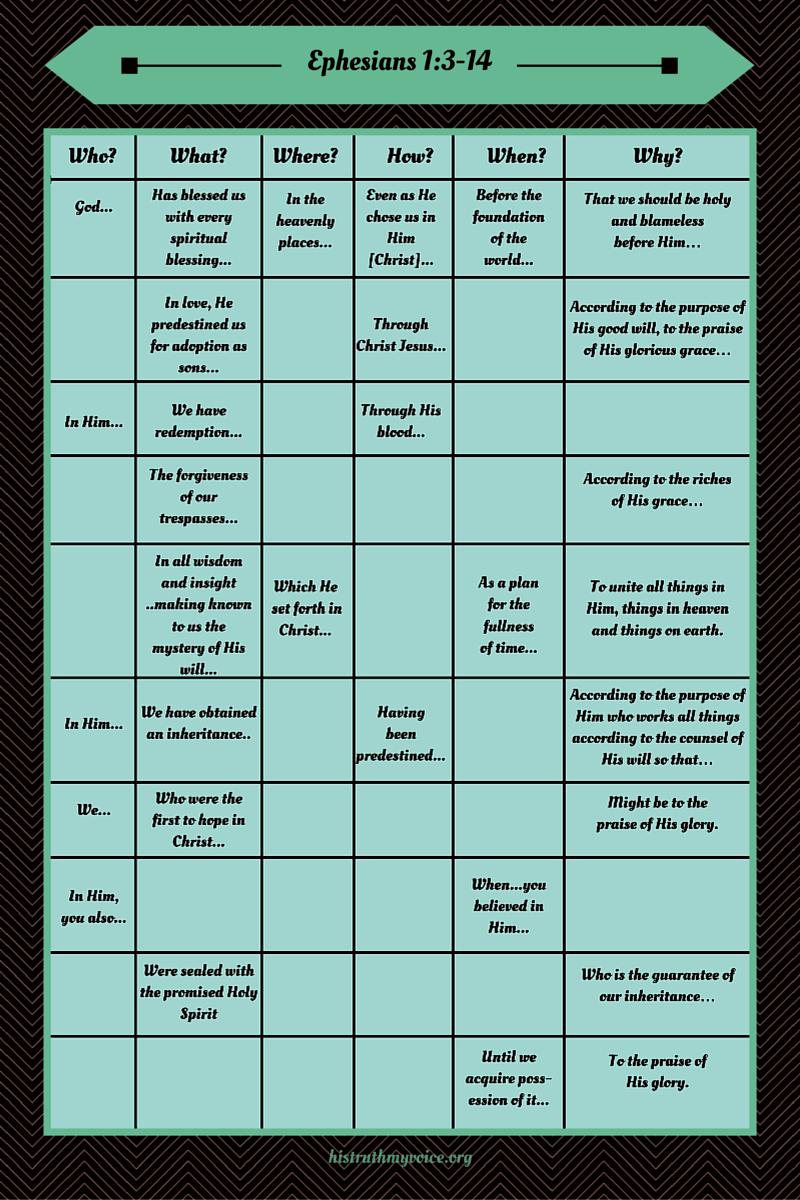 The creation of a race of beings who would be predestined—that is, designed in advance to be so much like God, that they could be adopted as His children;I think that you will agree that by breaking down the passage in this way, it makes it much easier for us to pick out the main points in God’s plan for mankind; a plan which was already in place even before God spoke the first “Let there be…” of creation, and one which called for:

Sadly, in our visits together recently, and as a result of our journeys back to the Garden of Eden, we have seen how Adam and Eve’s one decision to disobey God not only left us with a mess of loose threads to deal with, but it also resulted in the apparent negation of each of these aspects of God’s plan.  For, as a result of his sin, and…

From all appearances, then, it would seem that, as a result of man’s sin, God’s grand plan had been completely run aground.  But wait–-things aren’t always what they appear to be! You see, there is still one aspect of God’s “grand plan” that we haven’t discussed yet, and that is the integral part that God intended for Redemption to play!  Yes, redemption–it’s one of the most beautiful words in the all of the world, and that’s because it means:

And, what makes it even more beautiful is that this is exactly what Jesus did for us when He died on the Cross in our places; for, it was through His death that:

Redemption is truly amazing, isn’t it?  When you think about it, though, the most amazing part is not that a loving God would create man and then offer him so many wonderful blessings in return for obedience borne out of faith.  The most amazing part of redemption is that even after man had spurned God’s generous offer of Sonship, and had turned from God to go his own way, God still made a way to take the one who had rejected Him, pay for his pardon with the blood of His only Son, then make that man His son, and give him everything that He had promised in the beginning! That is something that only the God whom I know as my heavenly Father, could and would do.  And in response to that, all I can say is, “Papa, Papa, Thank You so much! 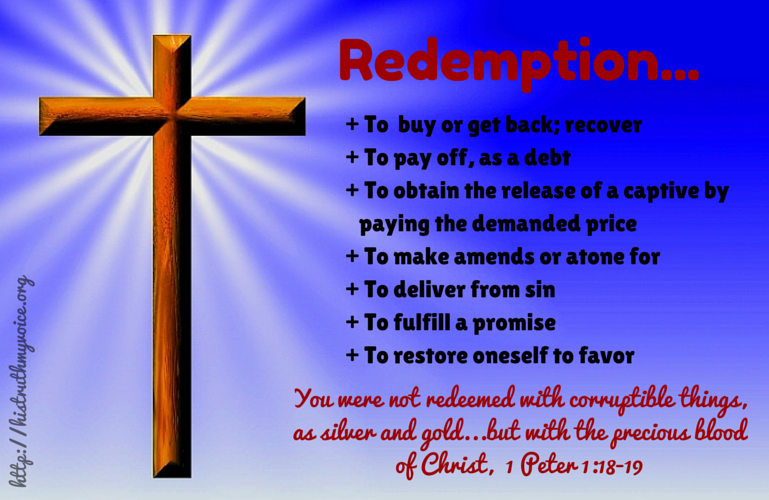