Making the Most of Our Travel Time | His Truth, My Voice 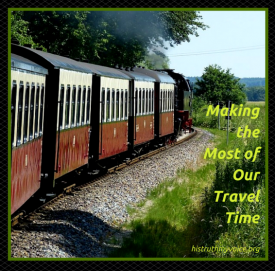 …By Preparing for What’s Up Ahead

Now that we have all viewed the video, “The Bible:  The Story Behind the Story,” and now that we are all back on board the Truth Train, heading toward our first stop in the Land of Revelation Knowledge itself, let’s try to make the most of our travel time by;

The Presentation of the Bible as a Story

As we learned from the video, in addition to the many “smaller,” more individualistic stories told about the people in the Bible, there is One Big Story that the Bible was written to convey to us.  This is the love story which began before the foundation of the world, when God purposed in His heart to have a family of His own to love.  From that instant–in some far away remote and eternal past–until now, God has been actively engaged in seeing that His purpose was, is, and will be realized.  In fact, the creation of the world, as well as everything in it, and the creation of human kind, plus all subsequent human history have been directed toward the achievement of that purpose.

Although the Bible doesn’t tell us everything that has happened over the course of human history, it does relate the most significant events in the far-reaching story of God’s redemptive relationship with man.  Even so, there is still so much contained within it—still so many details and smaller stories—that when it is approached from the more traditional method of study, it is often too overwhelming for people to take in.  For that reason, and in order to make the Bible more understandable to us, we will be taking a less conventional approach to our study of it by presenting the story it tells in the form of a play—one featuring a small but select group of players who will, in the course of their interaction with one another, make clear to us the One Big Story that God wants everyone to know.

The Program Guide for the Story

Like most other plays or theatrical productions, ours will come with a Program Guide which will help us identify the Cast of Characters, the locations where and the times when the action will be taking place, and it will provide us with a breakdown of the action into Acts and Scenes, with an Intermission break in between the Acts.  Here, then, is the Program Guide for this production.  Please take a few minutes to familiarize yourself with it so that when we actually get into the story, you will have an idea of what is happening. 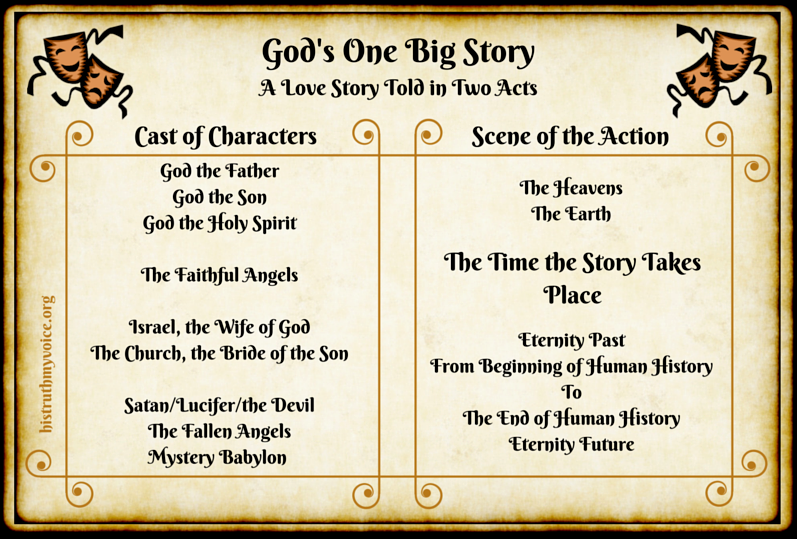 From this guide, it is easy for us to see that our Cast of Characters was formed from a mixture of both Heavenly Beings and Earthly Beings.  The Heavenly Beings, of course, are God the Father, God the Son, and God the Holy Spirit, along with those Angels who remained faithful to God when the highest-ranking Angel, Lucifer, led the other Fallen Angels in a rebellion against God.  The Earthly beings, on the other hand, are People organized into groups who, as Collective or Corporate Bodies, represent the three types of Covenantal groups that are characterized for us in the Bible:

As for the breakdown of the action of the Story, the Acts and Scenes fall naturally into alignment with the overall formatting provided for the story by the Ancient Jewish Wedding Tradition, something which was described briefly in the video, and something which we will learn more about as we delve deeper into the story. 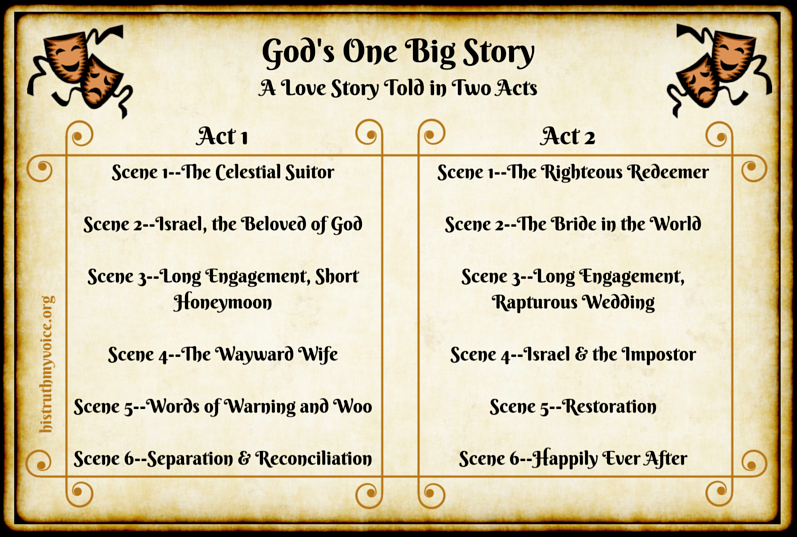 The Process for the Presentation

Finally, concerning the process by which this story will be presented—this will be done by presenting each one of the scenes on a different stage, with there being a total of fourteen stages all together.  There will be six stages for each of the six Scenes in Act One—the Old Testament; six stages for the six Scenes in Act Two—the New Testament; one stage for a demonstration of the events that will be taking place during the Intermission between the Acts; and one final stage, at the end of Act Two, where an epilogue for the Story will be provided.   At the end of each Scene or Act, we will re-board the train and, in the process of traveling to the next stage, we will attempt to make our travel time count by reviewing what we have learned at the stage then being left behind.

In the event that you have any questions about all of this, this might be a good place for me to hold up my sign saying, “Now what did you hear me say?”, and for you to leave those questions in the comment box that follows. 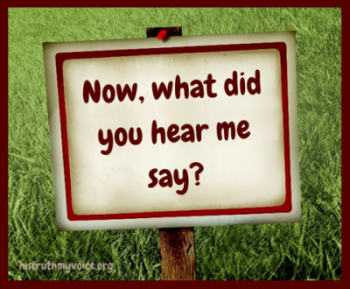