Why Couldn't We Stay the Way We Were? | His Truth, My Voice

To all of my returning guests, it is great to have you back again!  And to those of you who are visiting for the first time, “Welcome”—I am so pleased that you have taken the time to drop in for a visit today.  I hope you can stay for a little while, and that you will make yourself comfortable as we continue on in the discussion that we began during our last get-together; a discussion designed to lead us to a better understanding of the ages-old problem of, why, when we want to obey God in the spirit, do we so often fail to follow through in the flesh?  It’s the old flesh-versus-spirit battle; a battle that we will need to learn to win if we are ever going to become overcomers, like Jesus.

We began our search for understanding by going back to the beginning and looking at the first man God created, so we could see how he and we were originally designed to function.  What we learned was that when God created man, He first fashioned a physical body for him, then He breathed His Spirit into that body, and when He did, the human soul came into being.  This, then, set up the system that God intended to use when He wanted to relate to and to communicate with the man that He had created.  Once again, this is the way it worked:  God’s Spirit would speak to man’s spirit, man’s spirit would speak to his soul, and then man’s soul would speak to his body—each part relaying to man the will that God wanted to be carried out on the earth on His behalf.

In the ordering of things in this way, God not only established a “top-down” system of communication but He also put into place a “top-down” structure of authority (and this will prove to be important later on, so pay attention), one that looked something like this:

That’s a good question but before we can answer it, there is another question that must be answered first, and that is, why did God create man in the first place—just what did He intend for man to be?  If all He wanted was more servants, He could have created a few more angels; but He didn’t do that, did He?  No, that’s because God’s purpose in creating man was to provide Himself with Sons, not merely more servants.  For, as we learn in Ephesians 1: 3-14 (ESV):

Blessed be the God and Father of our Lord Jesus Christ, who has blessed us in Christ with every spiritual blessing in the heavenly places, even as he chose us in him before the foundation of the world, that we should be holy and blameless before him.  In love,he predestined us for adoption as sons through Jesus Christ, according to the purpose of his will, to the praise of his glorious grace, with which he has blessed us in the Beloved.

In him we have redemption through his blood, the forgiveness of our trespasses, according to the riches of his grace, which he lavished upon us, in all wisdom and insight making know to us the mystery of his will, according to his purpose, which he set forth in Christ as a plan for the fullness of time, to unite all things in him, things in heaven and things on earth.

In him we have obtained an inheritance, having been predestined according to the purpose of him who works all things according to the counsel of his will, so that we who were the first to hope in Christ might be to the praise of his glory.   In him you also, when you heard the word of truth, the gospel of your salvation, and believed in him, were sealed with the promised Holy Spirit, who is the guarantee of our inheritance until we acquire possession of it, to the praise of his glory. 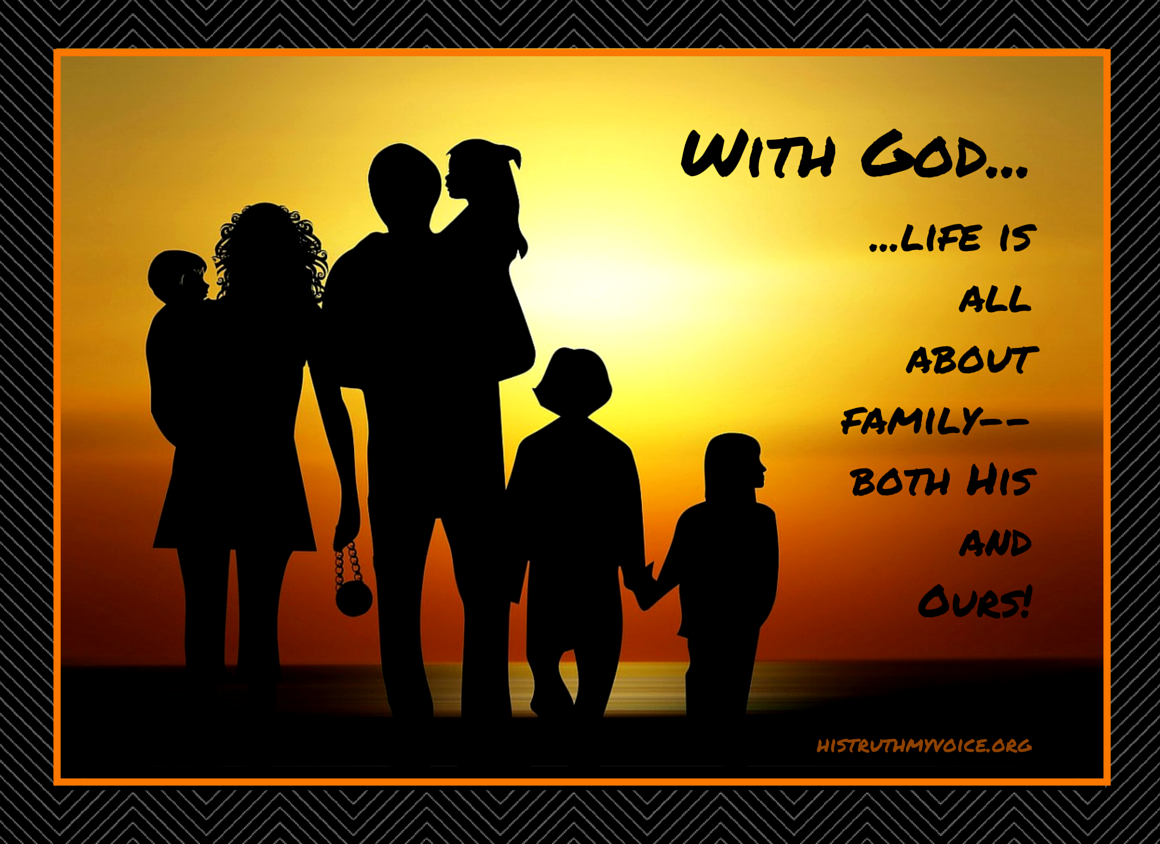 It’s All About Family

From this passage, we learn that, even before the foundation of the world, God had a plan in place that would provide Him with the “Sons,” or the family that He desired; a family upon whom He could lavish His love.  So, in pursuit of that family, God predestined—that is, He predesigned man (every man and woman) in such a way that he/they could:

Wow—is that mind-boggling, or what?  Almighty God designed and created him, and us, with every endowment we would need to become His children—every endowment, that is, with the exception of one:  that we should be holy and blameless before him.

This, then, brings us back to the question of why things couldn’t stay the way they were.  You see, although man was created with the capacity for holiness, he was not created holy.  At the time of his creation, he was living in a state of innocence, but not in a state of righteousness or holiness.  In order for him to be declared righteous by God, and to be found holy and blameless before him, he would first have to be tested and then be found a faithful steward of God’s Word throughout the test.  Bummer—I hate tests!

…the Lord God commanded the man, saying, ‘You may surely eat of every tree of the garden, but of the tree of the knowledge of good and evil you shall not eat, for in the day that you eat of it you shall surely die.’

God gave the man His Word (that is, He made known to him His will) concerning one of the trees that the man was responsible for tending, thus making the man the steward of that Word, and responsible for the execution of that Word.  When tested, if man kept God’s Word, he would be found holy and blameless before Him, be declared righteous by God, be made a Son, and he could eat of the Tree of Life and enjoy life forever in the presence of God.  However, if he failed to keep God’s Word, his disobedience, or his sin, would cut him off from the Holy God who longed to make him His son, thus creating an alienation which would result in the immediate death of his spirit and the future death of his body.

Oh, the drama!  There is a lot on the table here—life or death, heaven or hell, living as a Son of God or as a slave to sin and Satan–not only for the first man and woman, but for every one of their generations to follow!  With so much at stake, how is it that they were so easily seduced into giving it all up?

Are You Still Here?

Once again, this is where that seductive yet diabolical h-i-s-s-s-s comes into play, and once again…

Jason Gray singing, “The Sound of Our Breathing”…

2 thoughts on “…But Why Couldn’t We Stay the Way We Were?”