Abram: Called to Wait | His Truth, My Voice 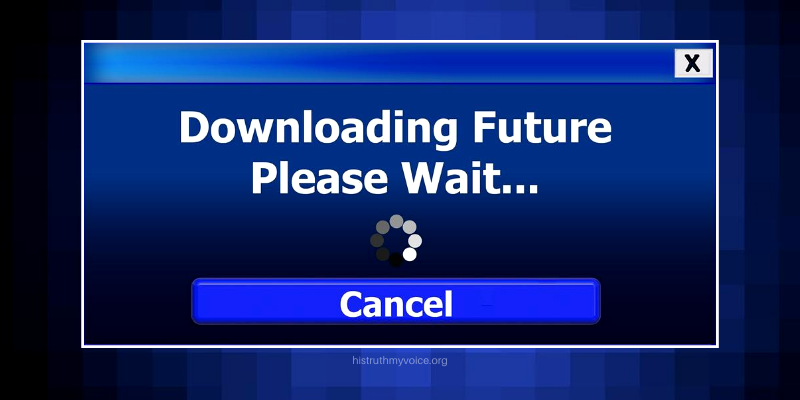 Last time, in Episode #3 of Biopic #1, we learned about Abram’s latest encounter with God.  It came on the heels of his victory over the four Kings from Mesopotamia, his meeting with Melchizedek, and the temptation presented to him by the King of Sodom.  During this encounter, God expanded upon His revelation to Abram, revealing to him for the first time that he would father a son of his own.  Emphasis was placed on the fact that, at this promise of a Son, Abram believed God and his faith was credited to him as righteousness.

At the time, God also reaffirmed His promise that Abram’s descendants would inherit the land, prompting Abram to ask for some tangible evidence—a guarantee of some sort—that this would be so.  His request was followed by a dream in which God revealed to Abram the future of both those descendants and the land—a dream which was followed by a Covenant-Cutting Ritual in which God bound Himself by blood to fulfill His Promise.

In reality, this Covenant represented the Marriage Contract between God and Abram, in which Abram pledged his descendants—the future nation of Israel—to be God’s Wife.  As such, it marked Israel’s Official Engagement to God and the beginning of their Betrothal Period—which would last until Moses (acting as God’s Proxy) comes to deliver Israel from her Egyptian bondage and carry her away to Mount Sinai, where their Marriage Ceremony is to take place.  As this was an Unconditional Covenant on God’s part, all that was left for Abram to do was to Believe God and Wait on Him for its fulfillment.

Here, in Episode #4, we will see just how successful Abram was in doing that.  As we await its commencement, here are a few that we need to keep in mind…

Bearing these things in mind, then, and with the curtain now rising on this Episode, we hear the voice of our off-stage Narrator once again, as he announces…

Narrator:  Now Sarai, Abram’s wife, had borne him no children. And she had an Egyptian maidservant whose name was Hagar.  So Sarai said to Abram…

Sarai:  See now, the LORD has restrained me from bearing children. Please, go in to my maid; perhaps I shall obtain children by her.

Narrator:  And Abram heeded the voice of Sarai. Then Sarai, Abram’s wife, took Hagar her maid, the Egyptian, and gave her to her husband Abram to be his wife, after Abram had dwelt ten years in the land of Canaan.  So he went in to Hagar, and she conceived. And when she saw that she had conceived, her mistress became despised in her eyes.  Then Sarai said to Abram…

Sarai:  My wrong be upon you! I gave my maid into your embrace; and when she saw that she had conceived, I became despised in her eyes. The LORD judge between you and me.  So Abram said to Sarai…

Abram:  Indeed your maid is in your hand; do to her as you please.

Narrator:  And when Sarai dealt harshly with her, she fled from her presence.  Now the Angel of the LORD found her by a spring of water in the wilderness, by the spring on the way to Shur. And He said…

Angel of the Lord:  Hagar, Sarai’s maid, where have you come from, and where are you going?

Hagar:  I am fleeing from the presence of my mistress Sarai.

Angel of the LORD:  Return to your mistress, and submit yourself under her hand.  I will multiply your descendants exceedingly, so that they shall not be counted for multitude.  ​

​​Behold, you are with child, and you shall bear a son.  ​​You shall call his name Ishmael, because the LORD has heard your affliction.  ​​He shall be a wild man; his hand shall be against every man, and every man’s hand against him.  ​​And he shall dwell in the presence of all his brethren.​

Narrator:  Then she called the name of the LORD who spoke to her, You-Are-the-God-Who-Sees; for she said, “Have I also here seen Him who sees me?” Therefore the well was called Beer Lahai Roi; observe, it is between Kadesh and Bered.  So Hagar bore Abram a son; and Abram named his son, whom Hagar bore, Ishmael. Abram was eighty-six years old when Hagar bore Ishmael to Abram.

A Human Solution is Never a Good Solution

At this, the curtain descends, not only marking the ending of this Episode, but also the beginning of our Critical Review.

So far, in our journey with Abram, we have seen God slowly and methodically revealing Himself and His plans for Abram.  We have also seen that following each of these revelations, there has been a period of testing—with this latest revelation proving to be no exception.  In this case, however, Abram wasn’t being tested by fear for his own safety, the lure of riches, or the threat of warfare, but by the Silence of God as he waits for Him to honor His promises.

The Test of Silence—
or, Learning to Walk in the Light of the Last Revelation 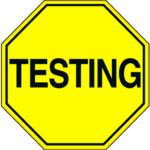 Shhh–The Test of Silence is Underway

I’m inclined to think that after such an exhilarating experience as the covenant-cutting ritual, Abram was expecting to see God act on his behalf immediately.  After all, what would be the point of any further delay…

So why the silence, why the wait, why the delay?

In order to answer this question, we first need to determine just what God wants to accomplish through our testing?  We can get an idea of His objectives in the following passages of Scripture… 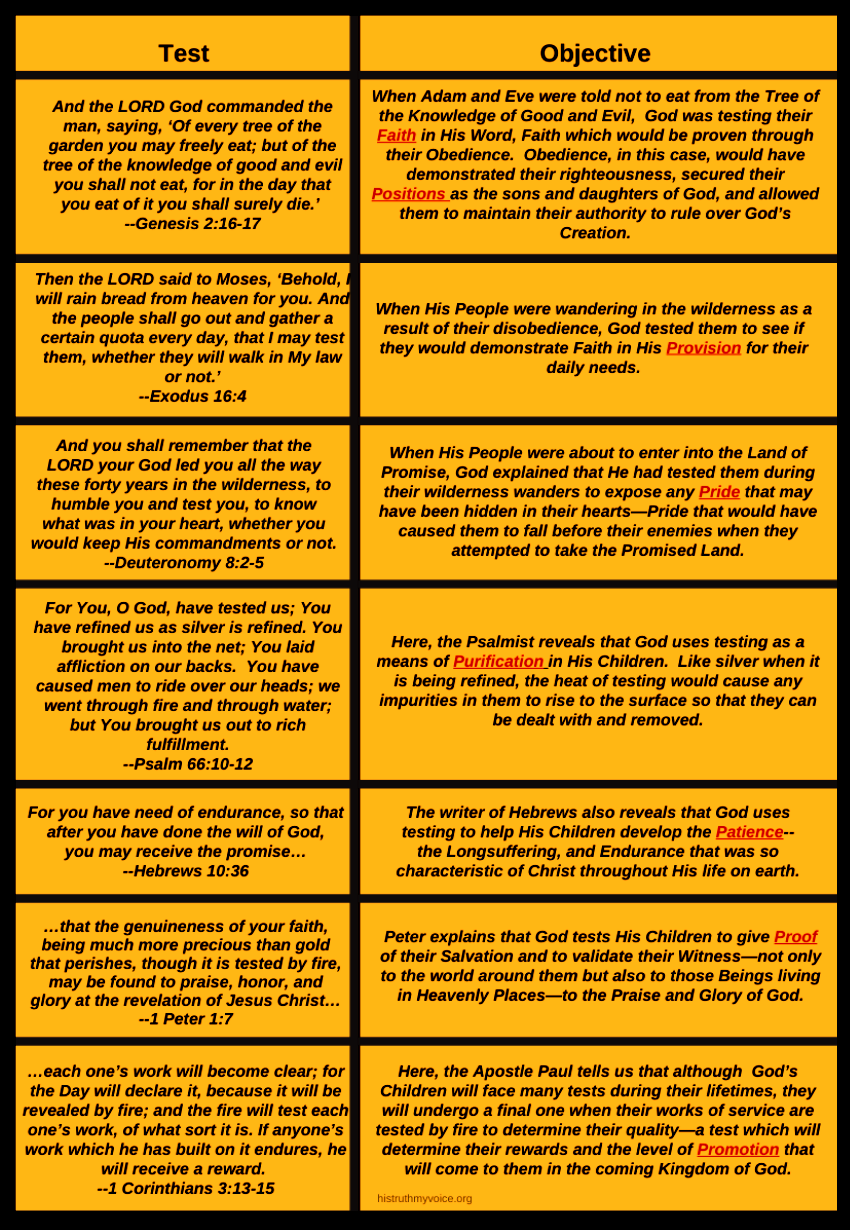 Some of God’s Objectives in Testing

That being said, let’s now look at the particulars of our Story to see if we can determine what God wanted to accomplish in the lives of Abram, Sarai, and Hagar through the Test of Silence and Delay…

Sarai did—no doubt because she felt like a failure as a woman.  To be unable to bear a child in that culture was considered to be a sign of God’s displeasure.  If Abram had come home and told her all about his encounter with God, thinking that it was her fault that they were still childless, she may have thought it was her responsibility to remedy the situation.

While it was perfectly legal and culturally acceptable at this time to use one’s servant as a surrogate, it was not God’s solution to the problem.  It demonstrated a lack of Faith in His Promises and His ability to do the impossible.

This, of course, takes us back to Man’s Testing in the Garden of Eden.  Here, just as in the case of Adam and Eve, instead of acting as Head over his household, Abram caved into pressure exerted by Sarai—with likewise disastrous results.  In this instance, pleasing his wife (perhaps silencing her complaints and laments) became more important that believing God.

Rather than admitting that she made a mistake and taking responsibility for the consequences of it, she blames Abram.  Like Eve, she shifts the blame—this time to Abram, who then shifts it back to her.

Since Hagar was Egyptian, Abram and Sarai most likely brought her back with them when Pharaoh kicked them out of Egypt.  As an idol-worshiper who had come to live in the home of “God’s People,” she should have expected to be treated with more consideration, rather than as a baby-making machine.

The appearance of the Angel of the Lord here is likely a Pre-Incarnate Visitation of Christ—who, instead of appearing to Abram or Sarai, seeks out the lost and the outcast Hagar.  This is reminiscent of the Good Shepherd who, in pursuit of the one lost sheep, leaves the ninety-nine behind.

Therefore humble yourselves under the mighty hand of God, that He may exalt you in due time, casting all your care upon Him, for He cares for you.

Although Hagar has been treated badly by Sarai, she is told to go back and submit to her authority once again.  In so doing, she and her child would be protected and provided for by the Lord.

…that Abraham had two sons: the one by a bondwoman, the other by a freewoman.  But he who was of the bondwoman was born according to the flesh, and he of the freewoman through promise, which things are symbolic. For these are the two covenants: the one from Mount Sinai which gives birth to bondage, which is Hagar—for this Hagar is Mount Sinai in Arabia, and corresponds to Jerusalem which now is, and is in bondage with her children—but the Jerusalem above is free, which is the mother of us all. ​

As Hagar is a picture to us of the Old Covenant which gives birth to bondage, Ishmael becomes a picture of the Works of the Flesh produced by those living under that bondage.

Now, to see what the Test of Silence, Delay, and Waiting accomplished or revealed in the lives of the parties involved, let’s assess them in the following way… 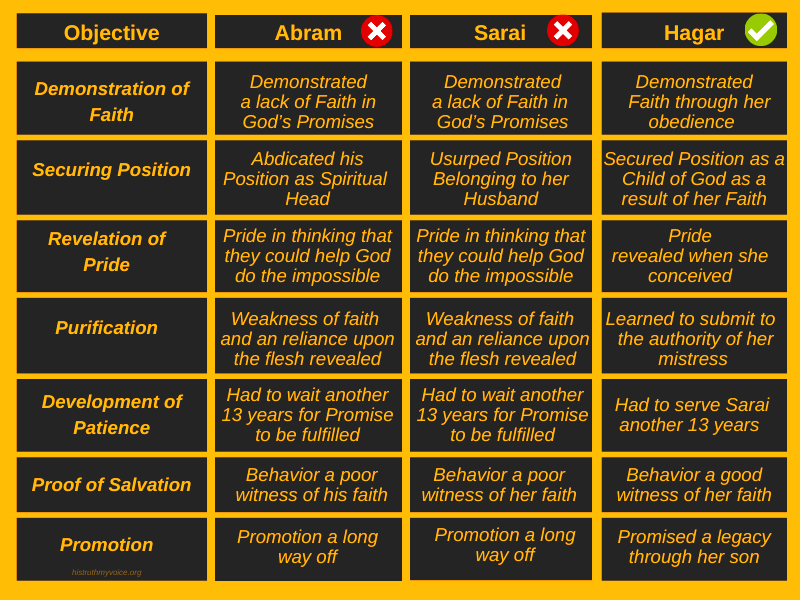 A Scorecard for Abram, Sarai, and Hagar

Before leaving this Episode, and in order to complete our Review, we need to ask ourselves these all-important questions…

One of the most important lessons that we can take away from this is, if we fail or refuse to wait upon God and attempt to accomplish His Will through our own human wisdom and fleshly means, we will…

As a result of his lapse of Faith and his failure to wait on God for His Provision of a Son, Abram‘s self-efforts produced Ishmael—whose descendants have been Israel’s enemies throughout most of her history.

Although God is noticeably silent where Abram and Sarai are concerned, He reveals Himself to Hagar as the God who desires that all—both Jew and Gentile—to come to Repentance and Faith through His Son, Jesus Christ. 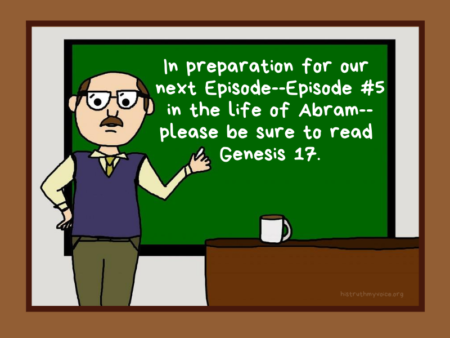 Images of Abram, Sarai, and Hagar courtesy of freebibleimages.com.

2 thoughts on “Abraham:  Called to Wait”