The Perils of Personal Autonomy | His Truth, My Voice

When the last installment of God’s One Big Story ended, here is where we were in the Story:

This, then, is the scene now opening up before us on Stage #1, as God’s One Big Story resumes, and as Vignette #3:  Man’s Sin and Fall from Grace begins. 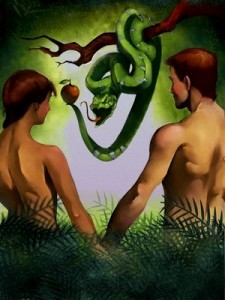 “…Now the serpent was more crafty…”

As the Vignette opens, we find the Man and Woman busy in the middle of the Garden, going about their daily routines, when a Serpent appears, seemingly out of nowhere.  We are immediately struck by the mysterious beauty of this creature, as he glides effortlessly across the ground and positions himself in and around the Tree of the Knowledge of Good and Evil.  In his advancement toward the Tree, we watch almost spellbound as the multicolored scales of his skin give off the appearance of iridescent, undulating tiles rippling with each of his movements, as they glisten in the light of the sun.  This hypnotic effect is soon broken, however, when our off-stage Narrator suddenly calls our attention to another, far less attractive, characteristic of this particular creature…

Now the serpent was more crafty than any other beast of the field that the Lord God had made (Gen. 3:1).

As startled as we are by the sudden intrusion of the Narrator’s comments, we are even more stunned when the Serpent himself begins speaking to the Woman, instigating this brief but very effective dialogue: 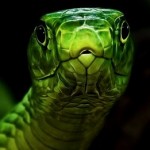 Serpent:  Did God actually say, ‘You shall not eat of any tree in the garden?’

Serpent:  You will not surely die.  For God know that when you eat of it your eyes will be opened, and you will be like God, knowing good and evil. 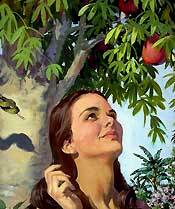 With the Serpent’s seed of doubt so simply yet skillfully planted in her mind, we watch as the Woman takes a piece of fruit from the forbidden Tree.  Holding it in her hands, she studies it from every angle, no doubt reasoning within herself about how beautiful the piece of fruit it is, how delicious it must taste, and how delightful it would be to be as wise as God.  Suddenly, after apparently casting aside all doubts as to what her next move should be, she bites into the fruit and then hands it to the Man who is with her, and he, following her lead, shares in the forbidden delicacy.  Immediately afterward, as an unsettling pall settles over the Stage, we realize that we have just witnessed an event so tragic that it will forever change life here on the earth.  Where everything in the Garden was, just a few minutes earlier, so light, bright, and beautifully untarnished, now the very same scene is one in which every pure hue of every created thing has been diminished or toned down through a universal application of gray. 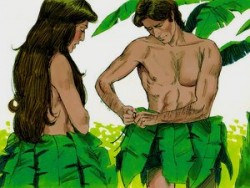 In addition to these unpleasant environmental alterations so rapidly taking place in the Garden itself, we also become aware of some unexpected changes taking place in the Man and Woman.  For, immediately after eating of the fruit, we observe them looking at each other with such startled expressions that one would think that they had never seen one another before.  Instantly, the precious innocence which they once shared is gone; an innocence that has so quickly been replaced by the uncomfortable awareness of their nakedness, and of the shame accompanying it—a shame so intense, in fact, that it compels them to rush to a nearby fig tree where, after plucking multiple leaves from its branches, they begin fashioning make-shift garments with which to cover their nakedness and shame.  However, as we are about to learn, works such as these can never cover Man’s sin, nakedness, and shame before God.

This lesson is driven home to us as we see the disgraced Couple, upon hearing the Presence of God walking through the Garden, hiding themselves among its trees.  Even though they have done their best to completely cover up their disobedience and its results, when in the Presence of One so holy as the Lord God, these Sinners still find themselves to be naked and ashamed.  However, as the One who is ever seeking the lost, God calls out to the Man, asking where he is, and initiating the following exchange:

God:  Where are you?

Man:  I heard the sound of you in the garden and I was afraid because I was naked, and I hid myself.

God:  Who told you that you were naked?  Have you eaten of the tree of which I commanded you not to eat?

Man:  The woman whom you gave to be with me, she gave me fruit of the tree, and I ate.

God (to the Woman):  What is this that you have done?

Woman:  The serpent deceived me and I ate.

God (to the Serpent):  Because you have done this, cursed are you above all livestock and above all beasts of the field; on your belly you shall you, and dust you shall eat all the days of your life.  I will put enmity between you and the woman, and between your offspring and her offspring; he shall bruise your head, and you shall bruise his heel.

God (to the Woman):  I will surely multiply your pain in childbearing; in pain you shall bring forth children.  Your desire shall be for your husband, and he shall rule over you.

God (to the Man):  Because you have listened to the voice of your wife and have eaten of the tree of which I commanded you, ‘You shall not eat of it,’ cursed is the ground because of you; in pain you shall eat of it all the days of your life; thorns and thistles it shall bring forth for you; and you shall eat the plants of the field.  By the sweat of your face you shall eat bread, till you return to the ground, for out if it you were taken; for you are dust, and to dust you shall return. 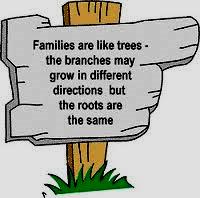 They All Go Back to Adam and Eve

Once these judgments have been handed down, our Narrator interjects a final, seemingly unrelated, comment, when he tells us that…

The man called his wife’s name Eve, because she was the mother of all living…

…no doubt, to remind us that we, as descendants of Eve, are all partakers of the same sin nature that originated with her and her husband at this pivotal moment in time.

Fortunately for Adam and Eve, and for us, too, this is not where or how this part of our Story ends; for, as soon as our Narrator finishes with what he has to say, we get to witness another act of grace on God’s part, as He slays two innocent animals and, from their skins, makes the garments that Adam and Eve need to appropriately cover their nakedness.  With their sins temporarily covered in this way, God speaks once more, acknowledging the momentous change that has just taken place, saying…

Behold, the man has become like one of us in knowing good and evil.  Now, lest he reach out his hand and take also of the tree of life and eat, and live forever… 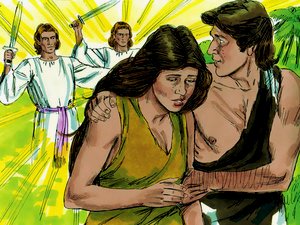 Sin Results in Separation from God

…a change so devastating that, before He even finishes His sentence, God takes the action of driving the Man and the Woman out of the Garden; sending them back to the ground from which Adam was taken–where he will now have to toil for that which had freely been enjoyed in his Garden home.  Then, to keep them from returning to the Garden and eating of the Tree of Life and living forever in their present sinful conditions, God graciously places Angels and a Flaming Sword to guard the entrance to the Garden, and to the Tree of Life.

While it is at this point that Vignette #3 does come to a close, our Story certainly doesn’t end here.  For, as we shall soon see, because everything in God’s Creation was designed to reproduce “after its own kind,” Adam and Eve’s choices will produce fruit that will prove to be very bitter indeed, not only to themselves but also to their children, and to the society that these children create.  Because of that, in our future Vignettes, we will spend a considerable amount of time acting as “Fruit Inspectors” !

Until then, though, let’s enjoy the message of “Before the Throne of God Above” by Selah

2 thoughts on “The Perils of Personal Autonomy”