Service: The Church as the Family of God | His Truth, My Voice 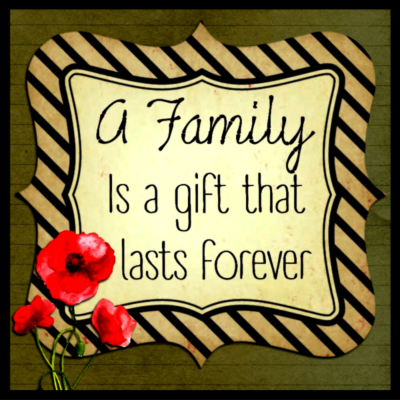 In our last exercise, Service: The Church as the Body of Christ, we were introduced to the concept that the Church, like the human body, is composed of three parts serving on three different levels, with each part being delegated a specific role to fulfill in its service for Christ.  As… 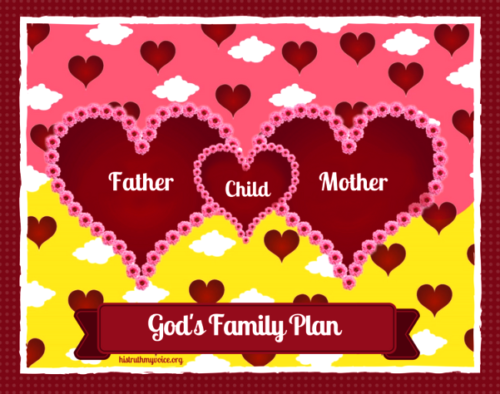 It used to be that if asked to define the term Family, most people would respond in the same way—that a Family, the most basic of all societal groups, is made up of a Father, Mother, and their children; with such extended members as grandparents, aunts, uncles, and cousins sometimes added into the mix.  But, in today’s culture, with its escalating divorce rate and proliferation of lifestyle choices, the term has too often come to mean whatever an individual wants it to mean, or whatever his or her circumstances dictate.  So today, in addition to what is known as the Nuclear Family just described, some of the other definitions in use are…

To be sure, many of these are deviations from the ideal established by God at the time of Man’s Creation, documented for us in Genesis 1:27-28 in the following way…

So God created man in his own image, in the image of God he created him; male and female he created them.

And God blessed them. And God said to them, “Be fruitful and multiply and fill the earth and subdue it, and have dominion over the fish of the sea and over the birds of the heavens and over every living thing that moves on the earth.”

This standard was later confirmed by Jesus when, as the Pharisees questioned Him as to the legitimacy of divorce, Jesus replied…

…from the beginning of creation, ‘God made them male and female.’ Therefore a man shall leave his father and mother and hold fast to his wife, and the two shall become one flesh.’ So they are no longer two but one flesh.  What therefore God has joined together, let not man separate (Mark 10:6-9).

Established by God and confirmed by Jesus, the divine standard, then, calls for 1 Male + 1 Female + their Children to equal a Family.  However, with the introduction of sin into the world following Adam and Eve’s fall from grace in the Garden of Eden, deviations from this ordained norm not only became a possibility but also a reality.  As we now know, had there been no sin, there would never have been any abuse, neglect, adultery, divorce, or death to make the aforementioned deviations possible—and, the Family would have functioned and flourished in the way that God had intended it to do. 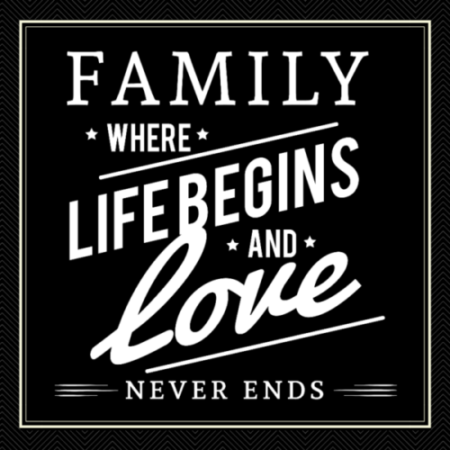 How is the Family Supposed to Function?

When considering how God intended for the Family to operate, it is imperative that we keep the following things in mind…

As long as the members of any given family are living in right relationship with God and in obedience to His will, not only they but everyone around them will be able to witness God being lived out in the flesh—with… 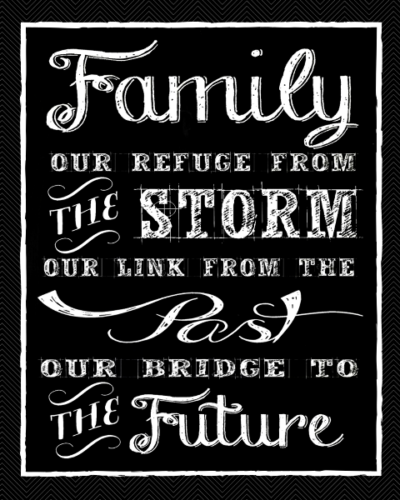 The Human Family as a Pattern for the Church 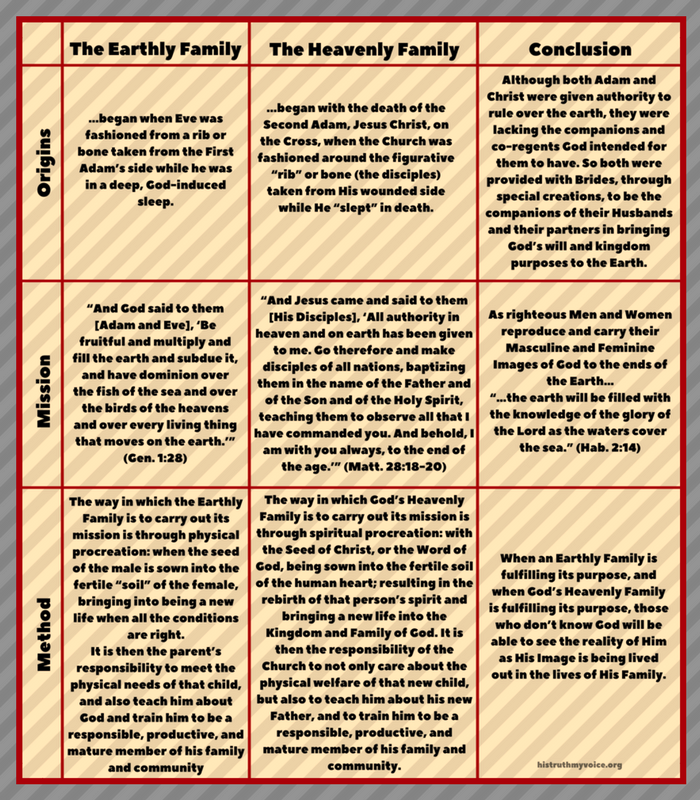 A Comparison of Families

From this illustration, we see that when God created the First Adam (1 Cor. 15: 22, 45) and his bride, He did so in such a way that it would serve as a prophetic picture of the Second Adam and His Bride, the Church.  For Adam, referred to in the genealogy of Jesus Christ in Luke 3:38 as “the son (with a small “s”) of God,” was meant to foreshadow the eternal Son (with a capital “S”) of God, Jesus Christ, in that…

Therefore, God set about providing him with a helper through a unique creation:  first putting Adam into a deep sleep, God then opened his side and removing a rib or bone from it, He fashioned from it a female counterpart specially designed for Adam.  This process, on a prophetic level, was to be a picture of what God was going to do through the Second Adam when, as Jesus was dying on the Cross, He fashioned His Bride, the Church, around the “bone” taken from the wounded side of Christ—that “bone” being the Disciples.

As for their Mission and Means for accomplishing them, they are virtually the same; for, both types of families were created for one purpose:  to reproduce the life of God, both the physical and the spiritual, as a means of bringing the will and purpose, and the glory of God to the ends of the earth.  Given the significance of this Mission to time and eternity, it should come as no surprise that the number one priority of God’s enemies would be the corruption and destruction of the Family, both the earthly and the heavenly ones—which is something we will learn more about in our next exercise.

[1] Edwards, Julie Olsen. “The Many Kinds of Family Structures in Our Communities.” Based on the author’s work with Louise Derman-Sparks in Anti-bias Education for Children and Ourselves NAEYC 2009.

[2] This is not to say that men cannot be nurturing or that women cannot be leaders or providers, etc.  These statements are merely meant to be generalizations of Godly ideals.